Greetings from Southern Germany, where we had the pleasure of sampling a smooth, delicious “Pear Champagne.”

Reminiscent of a mild, moussey cider, its fine pearly bubbles play delicately on the tongue. Vintner Jörg Geiger originally labeled his libation Pear Champagne—until he got word from France that he better quickly change it to Birnenschaumwein (or pear bubbly), since, as everyone knows, Champagne can only come from, well, Champagne.

This particular sparkler centers around a fruit that has been used since 1760: Champagnerbratbirne, loosely translated as “Baked Champagne Pear,” or a pear that bakes well. It has garnered distinction from Slow Food Germany. www.manufaktur-joerg-geiger.de/

A completely different bubble sensation is Germany’s most popular (as in most bottles sold) sparkler, Rotkäppchen Sekt. This market leader is one of the few products of the former Eastern Germany that have survived the criticism of discerning Western palates. “Little Red Riding Hood,” around since 1856, sells for—gasp!— just around 2 Euro a bottle. Truly a “Champagne of the people,” and something we couldn’t imagine from Champagne, France. 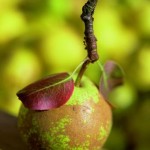 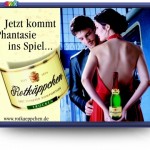