What Made Michelin Red? Michelin spreading its stars over Japan (drawing by Jean-Pierre Desclozeaux, as published in the book "Rouge de Honte")

by André Gayot The book started as a gift, both to the audacious people who dared purchase an automobile in the early twentieth century, and to their indispensable companions, garage mechanics. Its purpose was to help those brave drivers find a tasty destination for lunch as well as a garage that could repair their new machines, and perhaps change the tires, since selling tires was and still is the main goal of the Michelin Company, and a lucrative one at that.
The brothers Michelin got mad and decided to end the free distribution of the guide when they discovered how one mechanic employed it: instead of using a jack, he had propped up a car in his garage with a pile of their books. The guide Michelin became a business; although not profitable in itself, it generated huge publicity value.
The family enterprise of Clermont-Ferrand at the foot of the central France Mountains is now a huge multinational enterprise that dominates the world tire market. This globalization changed their main promotional instrument into a giant marketing tool, especially in countries where they face stiff competition, like the US with its own Goodrich Tires, or Japan with Bridgestone. It’s quite an undertaking to spread stars over the entire world! Reviewing the tens of thousands of restaurants of Tokyo with a fistful of inspectors is an audacious proposition. At the end of the day, the Japanese could not believe that so many three-star eateries were hidden around Fujiyama, and they did not know about them. The current director, Juliane Caspar of Germany, has plenty on her plate. Our colleague Jean-Claude Ribaut of Le Monde, the influential French daily newspaper, has just released an unofficial history of the guide, written with humor and wit and filled with interesting anecdotes and art from Jean-Pierre Desclozeaux. Since Michelin recently nicknamed the guide “The Red Book” (plagiarizing Mao Tse Tung), J.-C. Ribaut chose the title “Rouge de Honte” or “Red with Shame.” The guide brags it is serious, rigorous and impartial. But if one scratches the red varnish, reality can be different. Ribaut revives some questionable episodes as when a former bordello got a star in 1934. He delves into the quarrel with chef Jacques Manière, one of the most talented cooks in the 1960s, who was gifted with an unlimited imagination. After a superb lunch at his restaurant, two Michelin inspectors mentioned to him only that they were dissatisfied with the state of the toilets. Manière replied, “Did you come here to eat or to go to the john?” Manière was banned from the Michelin guide for the rest of his life. The guide was challenged for a quarter of a century by GaultMillau, who was quicker to discover the talents of a new generation of chefs and to assemble the elements of Nouvelle Cuisine. This induced a revolution in kitchens that Michelin did not see coming, like Louis the Sixteenth and the French Revolution. Michelin tried to make up for time lost, but sometimes did so too rapidly, as when it proclaimed the merits of a Belgian restaurant that had not yet opened and had to pulp 50,000 copies to save their reputation. A former inspector became a whistle blower, revealing troubling details like the lack of real annual visits to many restaurants which, indeed, were technically impossible. For the candidates of the stars, one word of advice: pay the utmost attention to your toilets. And shame on you if they are not neat and tidy, as you might be exiled from The Red Book for the remainder of your days. “Rouge de Honte” is available in French at Amazon 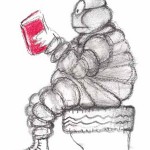 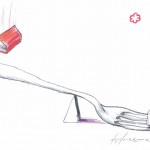 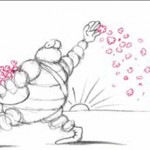 Michelin spreading its stars over Japan (drawing by Jean-Pierre Desclozeaux