Oktoberfest Celebrations Across the U.S.

Where to Celebrate Oktoberfest in America

Get your lederhosen ready for beers, brats and the chicken dance.

Each fall, cities across America fill with revelers donning lederhosen and downing steins of foamy beer in celebration of Oktoberfest. The annual German tradition pops up in towns from the West Coast to the East Coast, promising hearty food, great beer and lots of polka to all who come.

Get a little taste of Munich in the Lone Star State.

Throughout the four day fest there will be amusement rides, keg tapping, a German spelling bee, a German yodeling competition, beer barrel rolling and bowling, pretzel run and a dachshund parade and dash.

Tickets are $10 for adults and children 9 and younger are free. Thursday and Sunday are free for all. 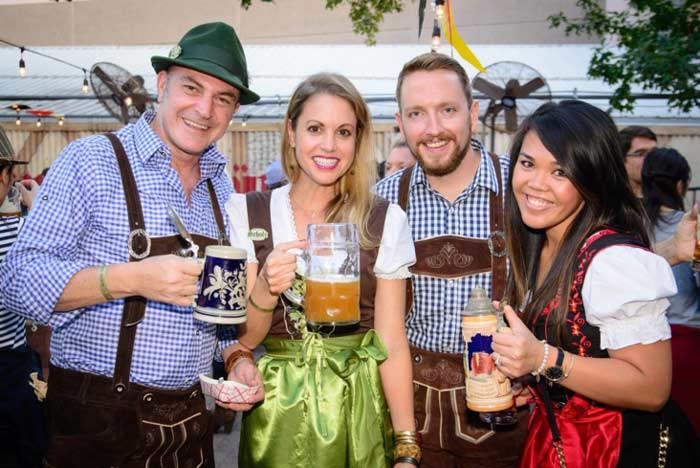 Indulge while you celebrate with all-you-can-eat sausage and bier tastings.

Big Bear is going all out for their Oktoberfest celebrations and this year will feature three new bands straight from Germany. Each weekend will include multiple musical performances throughout the day and several different food options including bratwurst, sauerkraut and beer cheese soup. Weekend activities include log sawing and stein holding contests, slam beer drinking and beer pong contests, kid’s contests and game booths (“Budenstrasse”). Do the chicken or polka dance as you make your way to one of six bars and beer gardens serving German and craft beers.

Sample more than 100 craft beers during this three-day event featuring some of the best craft beer from the Pacific Northwest. Activities include a Miss Buxom and Stein hoisting contests, “Texas Chainsaw” pumpkin carving and college football shown on big screens. Guests can enjoy beer from 5 oz. mini mugs, beer steins or large boots. The event is 21+ every day.

Harpoon Brewery in Boston throws its own Oktoberfest celebration with thousands of revelers and plenty of chicken dancing, brats and beer. They also brew their own October Fest beer, a Marzen-style beer brewed with Munich, chocolate and pale malts. The event takes place outside and underneath tents alongside the brewery.

A new addition is OktoberStretch, a mini-YOGA+ Live Music festival within the OB Oktoberfest from noon to 6 p.m. on Friday October 6th featuring yoga classes, games, and competitions, a chill area for meditation and breathwork, live music and drum circles, and eco-friendly vendors. At 1:00 p.m. and live music in the 21+ beer garden. On Saturday, will include performances by an OB Oktoberfest band, traditional oompah music and local acts, brat trot beach runs, beer tasting, sausage toss, stein-holding and brat eating contests and a balloon blow.

8. Oktoberfest By The Bay

Take in the views and breeze of the bay while enjoying a stein or two at this three-day event that’ll feature live music each day and brats and pretzels galore in addition to a variety of biers. Tickets are $15 for Friday and $25 for Saturday or Sunday and $85 for VIP each day, Saturday and Sunday have day and evening tickets available and $5 for kid’s tickets (13-18) valid on Saturday DAY Session or Sunday only.

Celebrate like they do in Munich at the largest party in Cape Coral.

The festivities will include three stages, two dance floors with live performances all day featuring bands straight from Germany. There will also be a carnival area with rides and games for the kids and hand made crafts and souvenirs.

Celebrate at one of the largest beer festivals in the United States.

The festival runs for two-weekends and attracts more than 350,000 guests, which is not surprising considering its full schedule of events including stein hoisting, keg bowling, dachshund racing, a bratwurst eating contest and happy hour. Entry is free and beers and food are available for purchase.

Spaten, along with other Fall and Oktoberfest craft beers from around the country will be served.

Activities include tapping of kegs, stein hoisting contests, dachsund dash and Oktoberfest Olympics and there will be live performances. The Midway Rides will feature carnival games, amusement rides, entertainment and fast-food booths, plus plenty of Spaten, sausages and schnitzel to go around.

Celebrate the town’s German roots with music and dance.

Fredericksburg, founded in 1846, known as “Fritztown” among older German residents, is home to “Texas German”, a dialect spoken by the first generation of German settlers. With such a rich history of German influence, it’s no wonder the weekend-long family-friendly celebration includes Oktubafest, the chicken dance and three days of live entertainment from yodeling to polka to accordion music. German dishes like sausages, sauerkraut and pretzels will be available and the beer selection will include both domestic and German beers. Tickets are $8 for one day, $14 for two days and $18 for three days.

A taste of Germany in the Midwest.

A tradition since 1961, Oktoberfest in La Crosse, Wisconsin, includes several parades, weiner races, polka bands and carnival rides among other activities spanning four days. Tickets for each event are sold separately. A four-day admission pass to the festival is also available.

Oktoberfest in Mt. Angel, Oregon offers a number of activities including a car show, dachshund race, 5/10k fun run and half marathon, golf tournament and kid-friendly activities. A variety of beers and wines will be available. Sip traditional beer straight from Munich or local Pacific Northwest beers.

Two months of beers and lederhosens.

Enjoy amazing views of the Brooklyn and Williamsburg bridges and Brooklyn skyline while enjoying live music and authentic fare and beers at Watermark Bar. They’ll be exclusively serving Oktoberfest beers including Hofbrau, Weihenstephan and Radeberger and each menu item (including beer) will be set at a price of $10. This family friendly affair will also have games and stein holding contests. Tickets are free though reservations are recommended.

Founded by German immigrants, the church celebrates its German roots with an authentic fest.

This year’s festivities includes more than 15 bands ranging from cover bands to authentic German musicians and, of course, beer and handmade brats. It’s all happening in a big-top tent featuring a beer garden plus kid-friendly activities at Kinderfest. Admission is $5 benefiting St. Alphonsus church.

Celebrate at the largest Oktoberfest in Tampa at Curtis Hixon Waterfront Park.

Dig into all the brats your heart desires and follow it up with a chance at some cool swag playing Bavarian games for free. Any mustachioed or bearded attendees can take a chance at the Beard & Mustache Competition. Other diversions include stein hosting, keg stacking, tug-of-war and cornhole. In keeping with the German tradition there will be plenty of food (sausages, sauerkraut, pretzels, etc.), music and dancing.

In 1994 this festival set the record for the largest chicken dance in the world.

First held in 1976, Oktoberfest Zinzinnati attracts more than 575,000 people each year for German-style music, food and beer. Enjoy such delicacies as sauerkraut balls, Limburger cheese and pickled pigs feet, washed down with plenty of local and German brews. Don’t forget to join in on the chicken dance, which achieved a Guinness World Record in 1994.