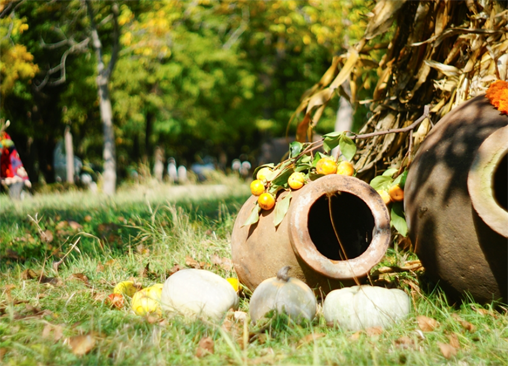 The country of Georgia sits on the eastern edge of the Black Sea, roughly 1,000 km east of Rome—where Europe and Asia intersect. It borders on Russia, Azerbaijan, Armenia and Turkey, and has a square mileage slightly smaller than the state of Maine.

Georgians have made wine in qvevri continuously for 8,000 years. These large, tapered egg-shaped vessels—often 1,000 or more liters—are buried underground to keep temperatures constant during fermentation and aging. Using the traditional method, winemakers ferment the juice and skins together. Skin contact turns what would otherwise be white wines into amber wines with tannins. Winemakers use qvevri to ferment red grapes as well as white.

Qvevri are still made by hand by Georgia’s master qvevri-making families. With the rising popularity of amber and natural wines, the demand for qvevri is on the rise in Georgia and internationally. In 2013, the United Nations added qvevri winemaking to the UNESCO list documenting humanity’s intangible cultural heritage.

The Saperavi grape varietal is native to the country of Georgia, where it is used to make many of the region’s most well-known wines. It is also grown in Armenia, Moldova, Ukraine, Australia and in small quantities in the Niagara and Finger Lakes regions of New York state. Saperavi is a hardy variety, known for its ability to handle extremely cold weather and is popular for growing in high altitude and inland regions such as Kakheti. It is a teinturier grape, containing the red anthocyanin within the grape pulp as well as the skin and is unusual in being one of very few such grapes used in single-varietal winemaking.

The wine has a deep opulent red color. The bouquet shows aromas of black mulberry, blackberry and cherry with a touch of chocolate and tobacco. The mouth features plenty of red fruit delivering excellent vinosity with soft tannins and well portioned amount of oak.