Alinea, Unlike Any Other Restaurant The name says it all. In the course of the unwinding world story, an “alinea” would mark the arrival of a new event of an idea of a philosophy. If the surging concept flies, it may be the beginning of a new episode. Alinea situates itself in a sphere in a forthcoming era to succeed the times of the inns, restaurants, brasseries, taverns, bistros, posadas, trattorias, eateries as we have known them so far. So be prepared: Alinea is not a restaurant like another chic restaurant; Alinea is like no other restaurant in the Americas, period.

When it opened in 2005 we wrote, “Alinea should charge you just to tour the place, to soak up the atmosphere and pick up some very smart decorating tips. Foodies will be flying in to eat here, much the same way it happened in the hey-day 70s of Le Français” (then unanimously proclaimed the best restaurant in the US). Time shows that this appreciation was true.  Alinea’s reservation waiting list boasts as many pages as “Gone with the Wind” and the history of gastronomy moves so fast that Le Français seems to hail from Jurassic Park.

Alinea’s experience begins at its doorstep when one penetrates into a post-post-modern bare set-up, evocative of a modern art museum. Tables are over-sized, widely separated, and deprived of tablecloths. All of this is designed to focus our attention on food and nothing else. Waiters, dressed like bank executives with three-button grey suits, slide smoothly across the wooden floor, delivering solemnly to the tables miniscule cups, small glasses, mini plates, mysterious decorative objects symbolic of an esoteric food that needs to be deciphered before eaten.

The dinner composed of twenty dishes is concocted with dozens of components in an order and a fashion constitutive of the art of Grant Achatz that can disconcert our not-so-well-prepared taste buds. So the maître d’ pops up to explain and secure our approach to the offerings coming in odd presentations at the tip of a metallic skewer, or on a steel string swing. Achatz constantly invents new preparations, changing combinations that he dubs with one single word such as “Yuba” for a shrimp, miso, mint consommé or “Bison” for a meat plate with red cabbage and eggplant in a rosemary fragrance. So one’s experience will not be repeated and it would make no sense to mention and analyze a particular offering that will be replaced by a new one the next day.

Achatz’s merits must be appreciated dynamically, as he proceeds and evolves. In this whirlwind of creativity, the dessert simply named “Chocolate” in its uniqueness must be a mainstay. Achatz unrolls a plastic coated cloth on your table and pours the ingredients of his chocolate dessert over it, then gathers and kneads the coconut, menthol, and hyssop with the hot cocoa. Not only is it the most sophisticated and paradoxically simple “pastry” you can think of, but also the most spectacular.

The Alinea experience has a theatrical component. Why not? The Chinese Emperor’s three-day-long banquet does as well. But there’s more substance to the Alinea project than its show-off aspect and the provocation with the twinkle in the eye to Escoffier. Although Achatz claims he is no artist, his cuisine is abstract. While treated for a rare tongue cancer, Achatz lost his taste and could not sample his own preparations. But in his impressive kitchens, he kept creating new dishes, reminding us of Beethoven composing music he could not hear or chess geniuses playing their games without a chess board. That’s sheer abstraction, isn’t it?

Is this molecular-inspired cuisine a path to the future or our progressive eating societies?  If you can afford it (the tasting menu is $150 and the Tour menu is $225), don’t forgo the experience. You may like it or not, but witness what could be a milestone and a landmark in gastronomy. Although Alinea’s can hardly be compared to a traditional restaurant and evaluated on the same scale, it is fair to place it at the top of the American food scene for its influence, its ingenuity, its pioneering spirit and its achievements.


You can click on each photo to enlarge to see dishes from Alinea’s restaurant menu. 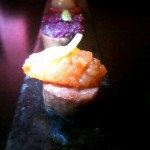 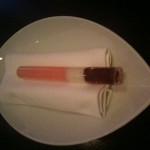 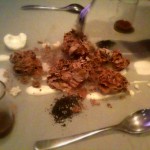 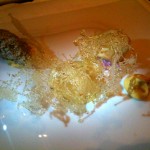 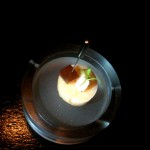 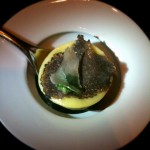 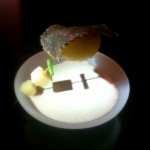 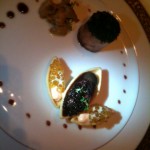 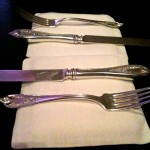 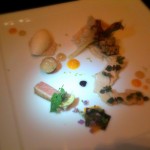 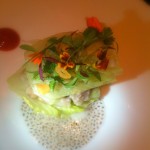 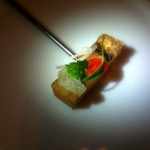 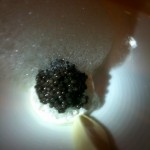 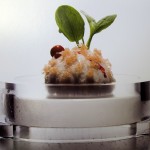