By admin
[youtube id=”kyhU6DOmV68″] by Sophie Gayot The sixth edition of Les Étoiles de Mougins, Festival International de la Gastronomie et des Arts de Vivre will be held September 16-18, 2011, on The Riviera in the gorgeous village of Mougins (Côte d’Azur, France). After the second edition in 2007, the prestigious event had to limit the number of participating chefs to 100 due to its overwhelming success. The Festival was created by mayor Richard Galy in 2006 to honor chef Roger Vergé who literally put Mougins on the world map with his restaurant and hotel Le Moulin de Mougins. If it sounds familiar, this is where Liz Taylor would hold her “big” AIDS charity dinner during the Cannes Film Festival. Watch the exclusive video interview with Mayor Richard Galy, the man behind the Festival. He wants people to know that Mougins is also a city of art with over 30 galleries and “ateliers d’art” stretching along the small winding and charming streets, and it now has a new Museum of Classical Art.   Over the course of the three days, the public has direct access to the chefs from many horizons with very different cuisines and techniques. They will do numerous cooking demonstrations, hold discussion panels that will help you understand what happens in restaurant kitchens, and discover some chefs’ secrets while sampling high quality products. To give you an idea, here are just a few names: Christian Le Squer (Ledoyen, Paris), Christopher Hache (Hôtel de Crillon, Paris), Thierry Marx (Sur Mesure, Le Mandarin Oriental, Paris), Fanny Rey (L’Outau de Baumanière, Les Baux-de-Provence), Meir Adoni (Israel), Jordi Artal (Barcelona, Spain), Joe Barza (Lebanon), Sébastien Bontour (Morocco), Michel de Matteis (Le Royal Palm, Mauritius), Raymond Blanc (Le Manoir aux Quat’s Saisons, Oxford, England), and Michael Cimarusti (Los Angeles, USA).   This year, chef Eric Frechon, from Le Bristol in Paris, is the guest of honor. He will preside over the very anticipated “Concours du Jeune Chef” contest in which five chefs will compete. They will have to prepare a “foie gras cuit servi chaud avec une garniture libre autour de la courge butternut” (warm cooked foie gras with a butternut squash based garnish), under very strict rules. The winner will get a cash prize and a one-week stage in some highly rated restaurants. On Saturday, Frédéric Anton, (Le Pré Catelan, Paris), will be in charge of the Amateur Contest, where high school students will be executing a recipe. As I will be attending the event, and judging the Saturday competition, come back to GAYOT.com’s blog to follow all of the action. You can click on the photo to enlarge.. 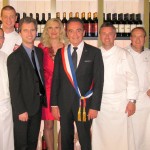