by Sophie Gayot One of Germany’s national holidays is the Day of German Unity (Tag der deutschen Einheit). It has been celebrated since October 3rd, 1991. It commemorates the anniversary of the German unification in 1990, a highly important event not only for Germans, but also the rest of the world. As I was in Los Angeles that day, I attended the reception held by Consul General Dr. Bernd Fischer and his wife Mrs. Jutta Fischer. “The day of unification is one of the happiest in the history of the German people. Germany’s political miracle and the country’s unity also laid the foundation for the unification of Europe, all which would not have been possible without the help of the United States,” declared Dr. Fischer. During the evening which was emceed by KNX Radio news anchor Frank Mottek (did you know he is German?), Los Angeles councilmember fourth district Tom LaBonge bestowed Dr. Fischer with a proclamation in honor of the Day of German Unity on behalf of the Mayor and the City of Los Angeles. In addition, Prince Frederic von Anhalt and Zsa Zsa Gabor received from LaBonge an official Certificate of Happiness and Prosperity for their 26th wedding anniversary. All things continued German with very good sausages from Berlin Currywurst restaurant located in Silver Lake, German cheeses, and desserts like Apfelstrudel, all paired with German beer and shots and cocktails made of Jägermeister, a very tasty German 70-proof digestif made with 56 herbs and spices. If you want to read more about Germany, check out André Gayot’s article about East Germany to discover its history and beautiful cities. You can click on each photo to enlarge. All photos © GAYOT.com 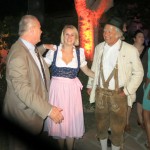 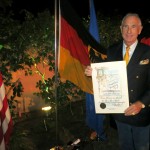 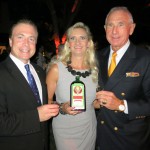 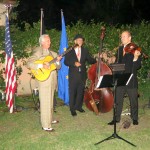 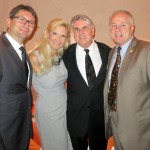