Dancing with Cloclo at the Opening Night of the 2012 COLCOA

By admin
[youtube id=”ml_WjSKrwxc”] by Sophie Gayot The opening night of the 2012 edition of City of Lights City of Angels, the 16th time this French Film Festival has been held in Los Angeles, was explosive! While we enjoyed Nicolas Feuillate Champagne, the attendees were treated to an exceptional performance by Belgian actor Jérémie Rénier in the movie “My Way”, a biography of the singer/songwriter Claude François directed by Florent-Emilio Siri. Every French citizen is familiar with François, who is known by the nickname “Cloclo” (which is the French name of the film). For those who are not familiar with him, Frank Sinatra’s song My Way, written by Paul Anka, was based on François’ song Comme d’Habitude. Rénier is so true to Claude François that you sometimes wonder if Siri used archival footage; he did not (except for a few black and white photos at the beginning). It took the actor six months to train for the dancing and vocals, though he admits that most of the singing used is by François. It took Siri over two years to complete the project. The result is a movie with great music (of course), rhythm, fun and sadness; I recommend seeing it at least twice despite its lengthy running time. At 2 hours and 28 minutes, it would have been better if it were fifteen minutes shorter. French singer Sylvie Vartan, who is mentioned a few times in the movie, was in the screening room of the DGA last night. She got to know Claude François very well. After the movie, she congratulated Rénier for his brilliant interpretation of the pop star who sold 67 million records before his accidental death at 39. You can click on each photo to enlarge. 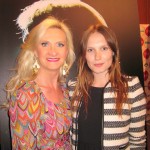 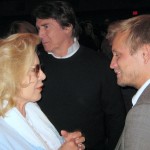 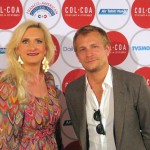 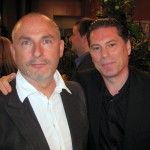