By admin
[youtube id=”OB3ObG8PM6w”] by Sophie Gayot   It was indeed hot during the Amateur Competition at Les Etoiles de Mougins, the 6th Festival International de la Gastronomie recently held in Mougins, France. The sun was shining, so the temperature under the tent was hot, as was the ambience. It became hotter when it came time for the members of the jury — including me — to deliberate, as we did not agree on who should win. Besides myself, the rest of the jury were chefs: Serge Gouloumès (Le Mas Candille), Sébastien Chambru (Le Moulin de Mougins), Christopher Hache (Les Ambassadeurs), Christelle Brua (Le Pré Catelan), Claire Verneuil (contestant on the 2011 season of the French Masterchef TV show), and the President of the jury, Frédéric Anton (Le Pré Catelan), who is also on the jury of the French version of the TV show MasterChef.   The good news is that we spent less time arguing than the competition itself took, which was 75 minutes. Five finalists, selected out of a long list of contenders, had to prepare five plates of a dish based on “variations autour de la tomate fin (faim) d’été:” variations around late summer harvest tomatoes. In fact, the timing worked out perfectly, as Frédéric Lefèbvre, French Secretary of State for Trade, SMEs, Services, Tourism, the Professions and Consumption, walked in a few seconds before Frédéric Anton announced the winner: Nadine Gobet. Gobet, who received the award from Mr. Lefèbvre in front of her proud family, declared: “It is not every day that a minister awards you a prize. I will keep extraordinary memories of this day.”   Her interpretation of the dish was “Bloody Mary and her courtesans”. The other results: second place, Tatiana Autran; third place, Tamara Greboval (I really liked her dish, “Déclinaison de tomates du moment et son caramel de tomate à la fleur d’hibiscus”); fourth place, Julia Gosea; and fifth place, Sophie Mineo. You can see their creations below. Next time I am in the Côte d’Azur, where Gobet is from, I want to go dine at her house!   You can click on each photo to enlarge. All photos by Sophie Gayot. 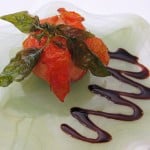 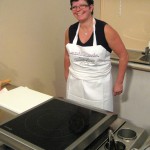 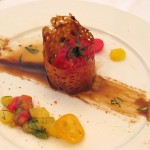 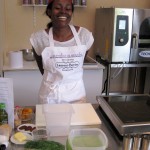 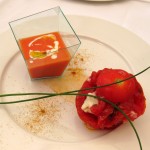 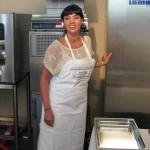 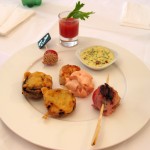 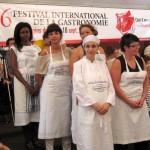 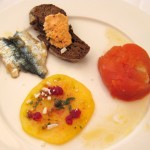 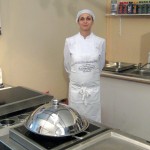 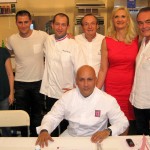 The jury before the competition: Christelle Brua 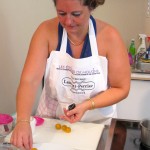 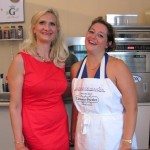 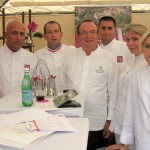 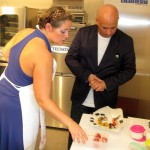