Fig & Olive And Its Presidents by Sophie Gayot Last Monday, September 26, 2011, traffic was impossible in West Hollywood, California, as President Obama was holding a private fundraising campaign dinner at Fig & Olive restaurant on Melrose Place. I was not able to attend the $17,900 per person event, as I was on a plane flying from Paris to Los Angeles. So last night, I decided to go there for dinner with the president… not Obama, but Laurent Halasz, the president of the Fig & Olive restaurants! I wanted to know all of the details of the evening of the 26th, which had became national news. I kept trying, but basically got nothing besides the fact that all went very well and that Obama was very courteous. After dinner, I headed into the kitchen, smiled at the chef de cuisine Mitchel Ramos, and got a happy face as the only form of response. So did Obama and his guests dine on salmon ceviche, branzino lemon ceviche, sesame tuna tartare, the delicious fig gorgonzola tartlet (a must-have), sea scallops and truffle artichoke tapenade, paella del mar or roasted veal tenderloin with fig chutney like I had last night? It seems that the only way to find out will be to ask Eva Longoria, Jack Black, Quincy Jones, Danny DeVito, Judd Apatow, Jamie Foxx, Jeffrey Katzenberg, Jon Landau, or California Governor Jerry Brown, who were there, next time you see them. The only thing I was able to learn is that Laurent’s mother, Francine, is the inspiration behind Fig & Olive. Francine is not a professional chef but an expert cook at home, and introduced Laurent to the world of good food and good taste. In fact, some of the recipes on the menu of Fig & Olive are straight from Francine’s kitchen! You can click on each photo to enlarge to see dishes from Fig & Olive restaurant menu. All food shots by Sophie Gayot. 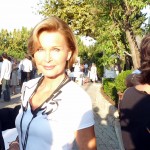 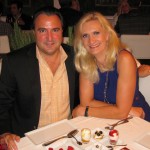 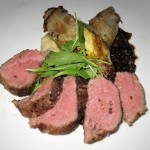 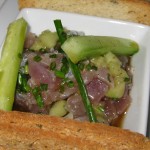 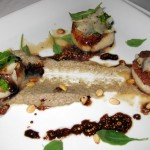 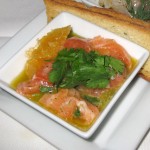 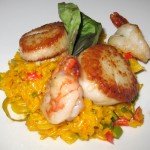 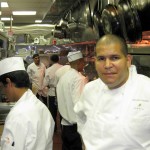 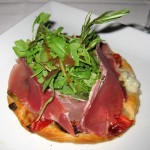 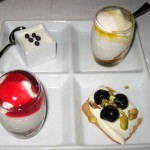 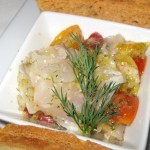