A Design DNA that Started with a Soul by Alain Gayot Kia, the South Korean automobile manufacturer, is on fire, having come a long way from their early days when they simply manufactured bicycles. The name itself means “arise out of Asia,” and that’s exactly what’s happening. Sales of the well-priced cars are up as consumers are taking a liking to the style, performance and value offered by the brand. Not long ago, sophisticated buyers would have frowned at the thought of settling for a Kia automobile. Today, many are proud and consider their purchase a wise investment. Kia Motors started producing steel tubing and bicycle parts in 1944 and their own bicycles in 1951, then graduated to scooters and motorcycles and manufacturing trucks and automobiles designed elsewhere. Over time, the company gained more expertise in building engines. It was not until 1994 that the Kia Sephia, an entry-level sedan, was offered in the United States, followed a year later by the Sportage, a small SUV with off-road capabilities. From there, things grew exponentially. Around 2005, “The Power to Surprise” slogan was created and Chief Design Officer Peter Schreyer joined Kia the following year with a long pedigree and a stellar 25-year design career at Audi/Volkswagen. Remember the Audi TT and the Volkswagen New Beetle? That was him. His quest in Korea will be challenging as the pace of evolution is astonishing. “You need to be daring,” says the passionate designer. “You need to lead and not follow,” he adds, explaining that the manufacturer needs to pay attention to the circle that starts with the consumer to the dealer and back to the designer. The Kia Soul began as a concept on the drawing board, and became an entry-level forward-thinking-design city car that started to establish a common design DNA for models to come. Until then, each Kia model was very different looking from the next. Now a design language speaks to the Forte, Sportage, Sorento and Optima for a more uniform, reconizable, corporate look. And boy, does that Optima have the power to surprise, with a Turbo or Hybrid Variant. In general, we have found the new Kia models attractive, starting with their price; electronic features from the UVO system with Bluetooth music streaming; and style, thanks to Schreyer’s design teams in Seoul, Frankfurt and Irvine. Wait until the Kia Motors’ GT Concept sedan revealed at the Los Angeles Auto Show hits the streets; then you’ll really know what we are talking about. And, if there is a question about the reliability of the cars, rest assured that they are backed by a 10 year and 100,000 miles warranty. The cars have also earned safety awards. Related Content: Reviews of Kia models South Korea Travel Guide Kia Motors website You can click on each photo to enlarge. 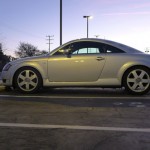 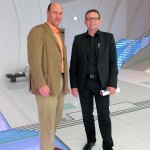 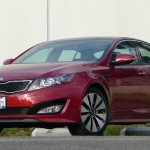 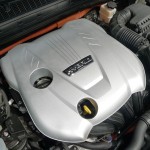 The engine of the Kia Optima Hybrid 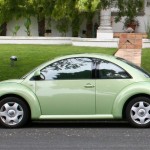 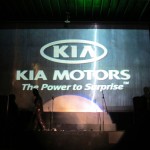 Kia introduced its “Power to Surprise” slogan in 2005 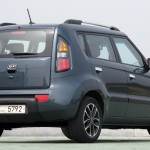 A three-quarter rear view of a Kia Soul 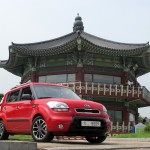 The Kia Soul in Seoul 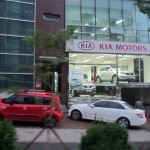 A Kia Motors dealership in Seoul 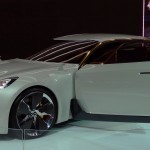