What were Los Angeles Mayor Antonio Villaraigosa and I doing around a tray of hot dogs yesterday? As my jacket indicates, we were at Pink’s Hot Dogs in Hollywood, where the Mayor had to elect the “LAX International Dog,” the signature hot dog at the soon-to-open Pink’s location at the Tom Bradley International Terminal at LAX.

A contest had been organized by the airport authority where over a hundred and fifty employees and tenants created their own designer dogs. Three finalists made it to Pink’s last night, and the Mayor had to pick the winner wiener. Staff assistant to the Deputy Executive Director for Airports Development and long-time Pink’s customer Tim Ihle won after a serious tasting by His Honor. Ihle’s dog, a chili, bacon, chopped tomatoes, sauerkraut and shredded cheese combo, requires quite the appetite.

Says a happy Ihle, “Pink’s was one of the first places I went when I arrived in Los Angeles fifteen years ago. I don’t come more than four times a year because the line is always so long. Last year, when my parents came to visit from Illinois, I took them there. I am happy they know Pink’s since I won the contest.”

Besides the contest, it is also the 70th anniversary of the world famous hot dog stand. Each night this week, for 70 minutes starting at 7pm, the chili cheese dog will be sold for 70 cents (instead of $3.50), with all proceeds going to charity. For 15 minutes, the Mayor himself, after putting on a Pink’s chef jacket, served a very happy and proud crowd. 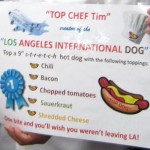 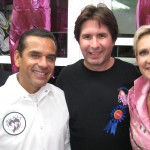 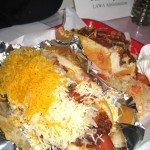 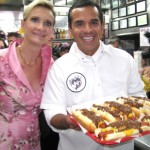