Virgin Atlantic A330 on the runway

It seems that a person can’t go anywhere anymore without overhearing someone else’s cell phone conversation. The one place that seemed safe was the friendly skies. Not so any longer. Virgin Atlantic has announced that it will become the first British airline to allow passengers to use their own mobile phones at 35,000 feet. Using a link-up with Panasonic-owned AeroMobile, passengers will be able to make calls on the airline’s new A330-300 Airbus flights between London and New York, with as many as twenty planes available for this service by the end of 2012. These planes feature redesigned upper class cabins with a “technology hub” to connect smart phones, USB and tablet devices, although the new mobile phone system will be available throughout the aircraft and will include SMS and cell phone email access, as well. In regard to limitations, only six people will be able to make calls at any given time, and those callers must use either Vodafone or O2 (European carriers) or T-Mobile (American carrier). Passengers will be charged their usual rates for international roaming calls, and as always, phones must be turned off during take-off and landing and within approximately 250 miles of U.S. airspace. According to Virgin, onboard tests have received positive response. For more information, visit the Virgin Atlantic website Related Content: Virgin Atlantic on our Top 10 Business Class Airlines list Review of Necker Island More Travel News You can click on each photo to enlarge. 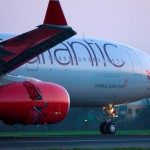 Virgin Atlantic A330 on the runway 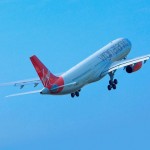 Virgin Atlantic A330 taking off 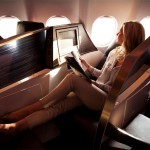