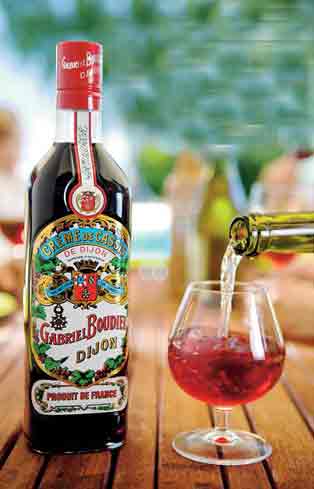 While many fruits are enjoyed fresh and raw, blackcurrants typically are dried like raisins and used in pastries such as mince pies.

Gabriel Boudier, based in Dijon, where its blackcurrants are grown, is made from two French “noble varieties.” Curiously, the company claims to exclusively use fresh fruit, yet fast freezes the fruit as soon as it is harvested. The frozen blackcurrants are then macerated to release their full flavor. Over a period of five to six weeks, neutral beet sugar spirit is added, after which the skins are removed and the final blend is perfected. The resulting liqueur is thick and syrupy, with a tartness that mirrors that of the berry itself.

We prefer not to drink crème de cassis neat, but mixed with dry white wine, a combination known as Blanc-Cassis, or Kir. The latter name derives from Félix Kir (1876-1968), mayor of Dijon, who popularized the drink by serving it to his many guests. Another fan of crème de cassis was Agatha Christie’s fictional sleuth Hercule Poirot. He wasn’t clueless when it came to knowing a good drink when he saw one!

1 oz. Gabriel Boudier Crème de Cassis
4 oz. dry white wine
Add the crème de cassis to the bottom of the glass, then top off with wine.
For a Kir Royale, simply substitute Champagne for white wine.