The Best Choucroute in Paris 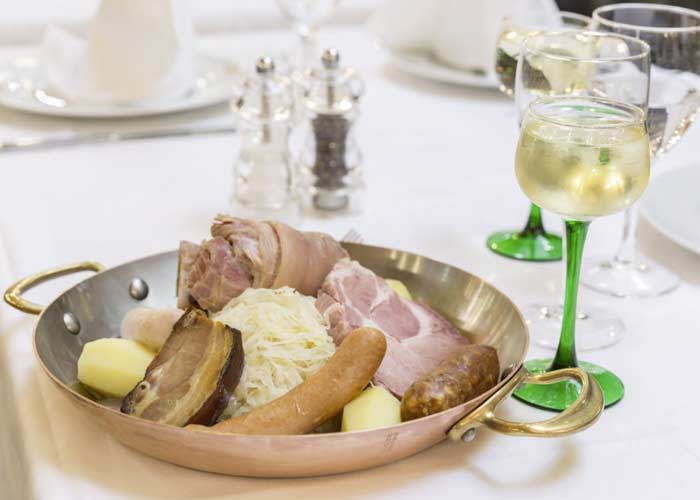 Fall is the season for the choucroute (French) or sauerkraut (German). Despite its Teutonic appellation, we owe the discovery of choucroute to the Chinese. The Mongols and the Tartars brought it to Europe through Switzerland and then to Germany and Alsace in France. Marco Polo was later a key player in the importation of this recipe. Choucroute is essentially minced cabbage salted and fermented in barrels or tanks. The fermentation in salty water produces lactobacils that protect the vegetable from oxidation. These lactic ferments contribute greatly to the health of our digestive tract. However, all cabbages are not fit for choucroute. In Alsace they use an old variety called “Cabus” that can weigh up to 25 pounds. The quality of choucroute, determined by connoisseurs, depends on its color, acidity and the aromatic balance of the various ingredients. In Strasbourg, choucroute is spiced with laurels, mashed garlic, cilantro and sometimes juniper berries and cloves.

In Paris, at this time of the year, Alsatian chefs delight in featuring choucroute on their menus. Chef Antoine Westermann, who hails from Strasbourg, is at the helm of the famous restaurant Drouant. He serves Alsacian style choucroute for €33, cooked with a bit of goose fat and accompanied by fine charcuterie. In Montparnasse, an even better deal can be found at Le Bec Rouge where a quality choucroute is offered for €18 as well as in the warm décor and ambience of Au Bretz

Choucroute shines most brightly at the local brasseries including Bofinger, where the décor of 1919 has remained intact and looks as young as at its creation. Brasserie Flo, founded by M. Floderer in 1870, when he fled Alsace then occupied by the Germans, is another bastion of choucroute. Lipp, a brasserie known for its affluent clientele of politicians and writers, offers choucroute atop a tender veal shank.