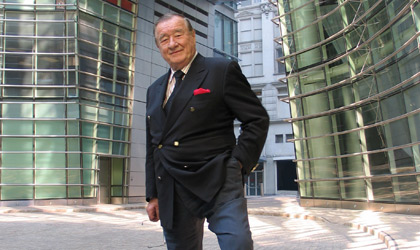 Famed restaurateur Sirio Maccioni passed away on April 20, 2020, at the age of 88. His family told news outlets that he died from natural causes in Montecatini Terme, Italy, the same Tuscan town where he was born. We offer our condolences to Sirio’s wife, Egidiana, and their three sons, Mario, Marco and Mauro, as well as the rest of the family.

Sirio’s influence was not just limited to New York. Over the years, the family business had restaurants in Las Vegas, Mexico City, the Dominican Republic, India and the United Arab Emirates.

Can there be any doubt that Le Cirque, over the course of its three renditions in New York, was a legendary restaurant? Going to Le Cirque was always very special. There was something of “je ne sais quoi” that made the time there a moment to look forward to and to remember forever. Could it be the mille-feuille of raw scallops and black truffles, or the foie gras ravioli? Or the “Stove” and La Crème Brûlée, signs that the end was sadly approaching? Or could it be Sirio’s presence, charisma, charm and elegance that I will never forget?

He was one of those men that mark your path in life. Being at Le Cirque was just like being a kid in a candy store (or an adult in a caviar shop). Let me say that very few restaurants create that effect.

It grew from society’s glamorous cafeteria, opened in March 1974, to a culinary mecca where the food and wine invited as much awe as some of the celebrities, from politicians and entertainers to artists and royalty, enjoying it. The show was not entirely in the kitchen. It was also in the dining room led by Sirio.

Known to almost everyone simply by his first name, he was a showman extraordinaire, a ringmaster. He commanded an attention and respect that was even larger than any of his grand restaurants. He fascinated us with his animated speech, his straight-shooting opinions, his uncanny ability to charm his way around a room, and his ceaseless drive and ability to make the headlines.

Sirio was the first recipient of GAYOT’s Restaurateur of the Year in 2008. Le Cirque was a selection on the GAYOT’s Top 40 Restaurants in America nine times.

For sure, Saint Peter is going to give Sirio the keys to the kitchen and the dining room.