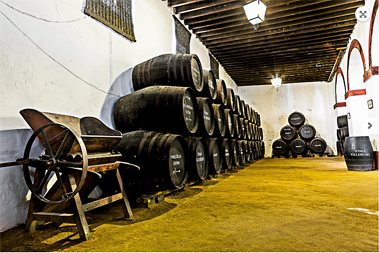 Sherry is a fortified wine, produced in Spain’s sherry triangle. Located in the province of Andalucia, this triangle consists of Jerez de la Frontera, Sanlúcar de Barrameda and El Puerto de Santa María. The soil in this region is chalk-limestone based, and provides the perfect conditions for growing the Palomino grape, Pedro Ximénez and Moscatel, the three grapes used for making sherry wine.

Dry sherry wines are made with the Palomino grape and are produced by complete fermentation. Two major styles exist: those that are biologically aged (under a layer of flor yeast – Fino/Manzanilla type) and those that are oxidatively aged (in absence of flor – Oloroso type). Two intermediate styles exist (Amontillado and Palo Cortado); they start as biologically aged wine but lose their layer of flor at a certain point and continue their maturation in the oxidative way.

• FINO
Fino wine is a dry sherry which owes its characteristics to being aged entirely biologically, that is to say the wine has aged in a barrel protected by a film of yeast, the flor, which has prevented it from oxidizing. Its color is a very pale straw yellow and its aromas are light, very dry, with an elegant note of yeast. Their alcohol content is usually about 15%. The Manzanilla should also be mentioned here, a Fino that is only allowed to mature in the Sanlùcar de Barrameda. Thanks to the close proximity to the Atlantic and the associated high salt content in the air, these Finos are fresh and mineral.

• OLOROSO
At first glance, the decisive difference to Fino lies in the volume of alcohol: Olorosos are fortified to 17 percent as young wines. Due to this higher alcohol content, the flor yeasts die and do not form a yeast layer. The Oloroso is therefore exposed to the exchange with oxygen and is expanded “oxidatively.” Not only does it taste stronger than a Fino, it also lives in a completely different world of colors. This ranges from bright amber when young to oily mahogany in more mature vintages.

• AMONTILLADO
It is an exciting character because its life starts as Fino and ends as Oloroso. It begins its ripening process as a 15 percent Fino and initially develops under the protective flor. Then, however, it is increased by at least two more alcohol volume percent. The flor yeasts die off and the wine is subjected to oxidation in its second maturation. This process gives the Amontillado a unique spectrum of aromas: oxidation gives it its complexity and nuances of almonds, herbs and a light pepperiness. The marriage with the flor is never lost and leaves a remarkable elegance.

• PALO CORTADO
Palo Cortado is also a wine aged oxidatively but unlike Oloroso it is made from young wines which were initially fortified to 15 percent. Later on the first stages of the ageing process it is decided to change the destiny of the wine by refortifying it to 17 percent, thus eliminating the possibility of any further development under a veil of flor. These wines are similar to Olorosos but with a lighter structure and great elegance but otherwise share most of the same organoleptic characteristics. Their alcoholic strength usually lies between 18 and 20 percent.

Bodegas Grant, located in the heart of the town of El Puerto de Santa Maria, has been owned by the same family since 1841. Edmundo Grant is the current generation caring for the bodega. The Grant family are former almacenistas (producers who age the wines and then sell them to a bodega) who only recently began to estate bottle. Although they do not own any vineyards, they primarily source grapes from the famed Pago Valvaina. Their label, La Garrocha, refers to a famous dance performed with a stick while on horseback.

The Oloroso La Garrocha has spent nine years ageing through the Solera system. The microclimate of the bodega produces a distinct environment that gives this sherry its unique characteristics.

First, the grape juice is fermented to form a base wine, which is then fortified with brandy to the desired alcohol level. The wines are now aged for at least three years using the so-called Solera process. At least three, but often several rows of wooden barrels are stored on top of each other. The lowest, eponymous row is the solera (from the Latin solum, meaning ground). The rows above are called criaderas. The “finished” and therefore oldest sherry is removed from the bottom row at the end of its maturation. However, you only take off a third of the barrel volume. The identical amount is again taken from the middle row of barrels and refilled in the solera. The second row is again filled with the corresponding amount from the third row. This principle continues up to the top row. The missing third will then be replaced with the new, just fortified wine: the mosto. In this way, young and old wines are married and ultimately guarantee a consistent quality of the end result.

This wine has a light, golden color. It shows warm, rounded aromas of almonds, walnuts, caramel and dried fruit. The palate unfolds dense layers of reduced balsamic vinegar and raw maple leading to a long finish.