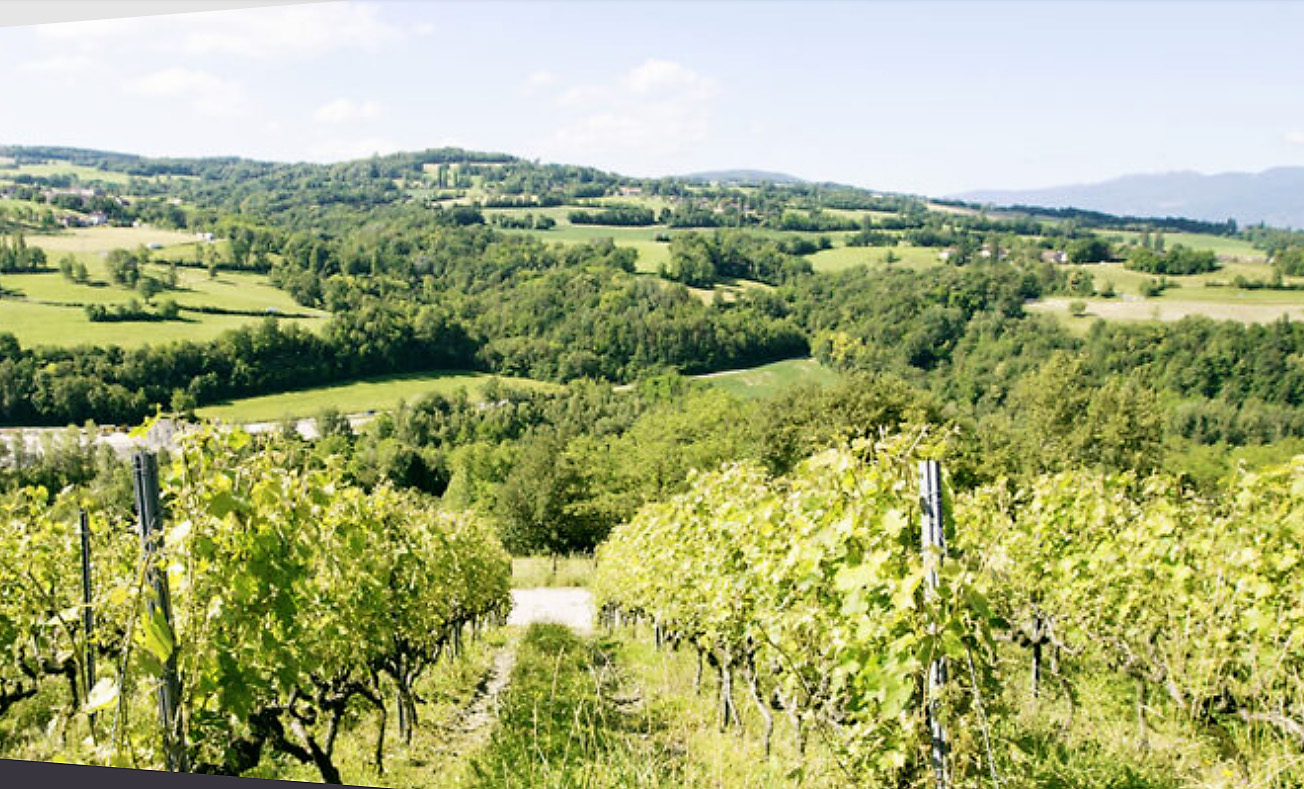 The AOC Vin de Savoie is the dominant appellation and covers the entire vineyard of wine-growing Savoie, which is located in the foothills of the French Alps. Recognized since 1973, it covers 4,400 acres divided into three regions: the glacially sculpted land along the South shore of Lake Geneva, the hillsides near the northern end of Lac du Bourget and the area bordering the Massif de Bauges. In this region crisscrossed by mountains, valleys, lakes and rivers, the continental climate is subject to many influences (oceanic to the north and Mediterranean to the south) and experiences changing times.

The vineyards are mainly located on hillsides, most often on old glacial moraines (rocks and soil left behind by a moving glacier) or on scree (broken rock fragments). But in view of the dispersion and diversity of the vineyards, the terroirs are very variable, and the quantity of the exposure to the sunshine, very influential on the quality of the grapes and the types of wine produced. The wines are mostly white, made from the following grape varietals: Chasselas, Jacquère, Altesse (also known as Roussette), Verdesse, Chardonnay and Roussanne. Light red wines are made from Mondeuse, Gamay Noir and occasionally Pinot Noir and rosés are made from Gamay.

The principal appellation for Altesse (Roussette)-based wines in Savoie is Roussette de Savoie, with or without its four cru names of Frangy, Marestel, Monterminod and Monthoux. The Altesse grape, also known as Roussette, did not get its name by accident. Translated to “Highness” – as in, Your Higness – Altesse is perhaps Savoie’s most noble, native varietal. It boasts delicate, complex floral aromatics, juicy acidity, and well-made versions, such as the one from Domaine Lupin, also have a capacity to age and transform in bottle over many years.

Bruno Lupin’s village of Frangy lies in the valley of a river called Les Usses. Rather than producing light, quaffable wines made with Jacquère, as is the custom in the majority of Savoie, the vineyards in Frangy are predominantly planted with Altesse. The village is recognized as a privileged place for this grape. As such, it has the special status of Cru de Savoie. Within Frangy, Lupin’s estate vineyards all lie on a hillside called Les Aricoques. This slope is fully south-facing, protected from the harsh northerly winds. It captures the sun’s warmth so well that in a small thicket of brush and chestnut in the middle of the hill, cicadas sing in the summer months.

In the winery, Bruno is hands-off with minimal intervention. After a manual harvest, native yeasts start the fermentation in stainless steel, and sulfur levels are kept to a minimum. Malolactic fermentation is partial, around 20% as he looks for the right balance of body and freshness. The acidities are never corrected and the wines ferment to dryness. The latter point is important, as Altesse has very high acidity, and most producers leave a certain amount of residual sugar to cover that up, to the detriment of the wine’s structure and ability to age.

The wine has a vibrant pale golden color. It offers a wonderful nose of bergamot, honeysuckle, spicy gingerbread and hints of green apple. The palate exhibits a zippy freshness and flavors of nougat and yeasty lees supported by all the Alpine minerality you would expect from fruit grown in stony soils in the Alps.

Suggested food pairings: as an aperitif, crayfish salad, melty cheeses (think fondue and raclette), delicate freshwater fish like perch, anything with a touch of spiciness.