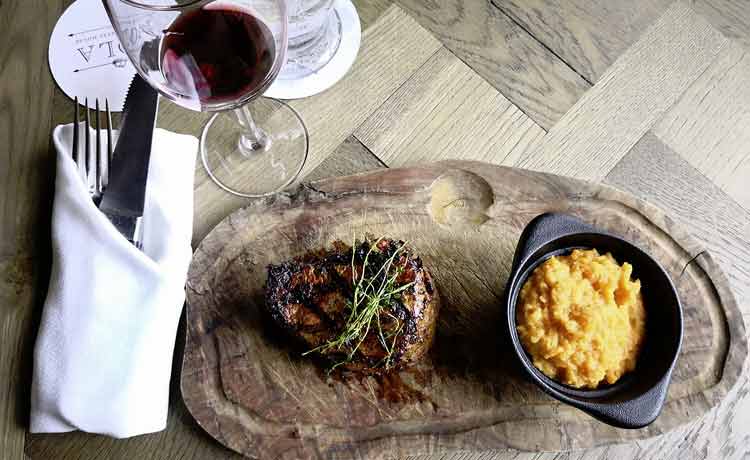 Best Wines for Pairing with Steak

As every gourmand knows, wine is the consummate complement to steak. Selecting the right vino to pair with a particular cut of meat can spell the difference between a simply enjoyable meal and a transcendent feast.

We’ve chosen a diverse assortment of reds from around the world — and at varying price points — for GAYOT’s list of the Top 10 Steak Wines.

> COFFEE & CHOCOLATE: They make a delicious combo. Do it with these artisanal Belgian chocolates we have tasted for you. ENJOY 10% OFF YOUR ENTIRE ORDER with GAYOT’s exclusive promo code. ORDER NOW!

It was a sensational year for wine production across the state of Washington in 2012, and there are any number of gorgeous reds that would do right by a prime cut of meat. But this offering from the first Washington winery to focus on Cabernet Sauvignon-Syrah blends as deluxe wines, is emblematic of the 2012 vintage’s greatness — intense flavors highlighted by black cherry and cassis, with unassailable structure and polish.

Suggested Cut: This sumptuous wine calls for a big, juicy ribeye with lots of marbling.

This blend of 95% Cabernet Sauvignon and 5% Cabernet Franc is a grand tribute to the late Emily Miner, who co-founded the award-winning winery back in the mid-90s. Winemaker Stacy Vogel applied modern technology to Old World techniques to coax the very best from the exceptional Napa Valley vineyard sites. You’ll marvel at how much good stuff this robust red has going on. There’s an abundance of delicious black fruit enriched with cocoa notes, a touch of espresso and the unmistakable warmth of toasted oak. So meaty it practically sizzles.

> Check out GAYOT/s Wine of the Week.

This is a blend of (mostly) Cabernet Sauvignon, Syrah and Grenache made with grapes sourced from Washington, California and Idaho. Yes, Idaho — believe it or not, the Gem State is one of America’s up and coming producers of quality vinifera. You’d be hard-pressed to find another steak mate with as much personality at this price point, which has been House Wine’s forte since its inception in 2004. The Steak House cab is lean, but by no means a pushover. The fruit — dominated by blackberry and black cherry notes — shows front and center, with a fair degree of spiciness bringing up the rear.

Fun fact: This Napa Valley institution was founded in 1888 as a barrel-aging facility called A.L. Tubbs, and was one of the first wineries in the area made of stone instead of wood. Another fun fact: Chateau Montelena’s 2013 Cabernet Sauvignon. It’s tremendous fun, actually. This wine should really come into its own in a decade or so, but right now — and it’s ok to drink right now — it’ll take a few sips before the density and concentration of flavor reveals itself. It’s worth the wait.

Nikola Nobilo founded this iconic winery in 1943, and in the ensuing decades helped lead the move from hybrid grapes to Sauvignon Blanc and Pinot Noir in New Zealand. Nikola passed away in 2007, but his legacy of producing high quality wines at great value lives on. The Icon Pinot Noir is made with 100% Marlborough-grown fruit sourced from three estate vineyards. Five days of cold-soaking promotes extraction of dark berry fruit flavor without harsh tannins. It’s a sumptuous, well-balanced wine with fresh minerality and just the right amount of acidity.

Simply put, this is one of the finest American wine releases in recent memory. A near-perfect union of climate, soil, fruit and winemaking, courtesy of legendary vigneron Pierre Seillan, who dubbed his celebrated methodology droit du sol, “right of the soil.” While it hails from Sonoma County, the La Joie is a kindred spirit to the best wines of France’s Pauillac. The blend consists of 71 percent Cabernet Sauvignon, 16 percent Merlot, 8 percent Cabernet Franc and 5 percent Petit Verdot. It all adds up to a wine that is elegant, powerful and, above all, unforgettable.

The ancient town of Gattinara and its surrounding area isn’t as well known as some of Piedmont’s other DOCGs, but it belongs in the conversation about Northern Italy’s finest Nebbiolo-producing regions. The Travaglini family has been making Nebbiolo (known locally as “spanna”) in Gattinara for nearly a century and, since 1952, putting it in unique curved bottles designed to catch sediment during decanting. The 2011 is full-bodied, with big berry flavor, some pepper, vanilla and a silky smooth finish.

Alan Hickinbotham established Hickinbotham Clarendon Vineyard in 1971, planting dry-grown Cabernet Sauvignon and Shiraz on a 200-acre site that has since supplied fruit to produce many of Australia’s greatest wines including Penfolds Grange Hermitage and Hardy’s Eileen Hardy. This graceful Shiraz, a partnership between celebrated winemakers Charlie Seppelt and Chris Carpenter, shows delicacy and elegance, with a plush, complex palate.

As a LEED Gold certified winery (the first in the world) with sustainable vineyards, Stoller is as resource efficient an operation as you’ll find in the Pacific Northwest. The savory 2014 Dundee Hills Pinot Noir is very approachable, with notes of mistletoe, exotic spices and Bing cherry. It’s classic Willamette Valley pinot at an excellent price point.

A standout medium-bodied Cabernet Sauvignon from one of California’s most prominent winemakers, Ed Sbragia, formerly of Beringer. The Andolsen Vineyard cab boasts silky tannins and a fleshy mouthfeel. A small amount of Cabernet Franc was added to imbue the wine with structure and herbal characteristics. You’re likely to detect hints of ripe cherries, charcoal and leather as well.