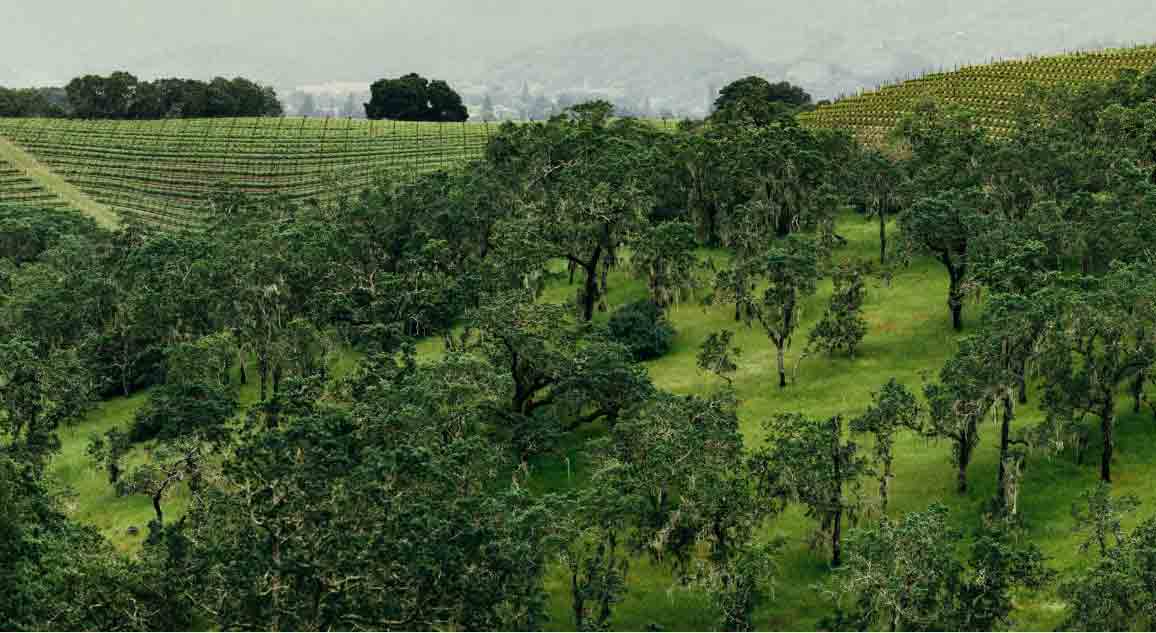 Although it originated in France, Cabernet Sauvignon is one of the world’s most planted red wine grape varietals. It is cultivated in nearly every major wine producing country. The top performing countries for Cabernet Sauvignon include France, Italy, Spain, Australia, Argentina, Chile, New Zealand and the USA. For most of the 20th century, it was the planet’s most widely planted red wine grape until it was overtaken by Merlot in the 1990s. However, by the early 21st century, Cabernet Sauvignon had once again taken first place, with a total of 820,000 acres under vine worldwide.

Cabernet Sauvignon is a relatively new varietal born from the crossing between Sauvignon Blanc and Cabernet Franc during the 1600s in Southwestern France. It was the first classic varietal whose parentage was determined by means of DNA analysis, which had just become popular at the time. This happened more or less by chance when the DNA profiles of the most important varietals cultivated in California were determined and compared while creating a genetic database. This was done in 1997 by Dr. Carole Meredith and John Bowers at the University of California, Davis and revealed a parentage Cabernet Franc X Sauvignon Blanc. This is also the reason why it was often confused with Cabernet Franc, especially in the 19th century, but also with the varietal Carmenère (direct descendant of Cabernet Franc). The worldwide surprise was so great because until then it had been doubted that white varietals could be involved in the creation of red ones.

Cabernet Sauvignon is a stellar grape that often stands alone, but it also works very well in blends with other red varietals. The expression and style of Cabernet Sauvignon will be different depending on the geographic origin of the grapes, how they are cultivated, and the choices and skills of the winemaker, including the date of harvest. In Europe, most winemakers blend varietals together to harmonize flavors, acidity and tannins, creating balanced and complex wines. Cabernet Sauvignon is often a favorite, as it is a powerful presence in blends. Most famously, Cabernet Sauvignon is an important component of many wines from Bordeaux. There, it is often accompanied with the other main red Bordeaux varietals: Merlot, Cabernet Franc, Malbec and Petit Verdot. Despite the natural full-bodied flavors of Cabernet Sauvignon, Bordeaux wines can be beautifully complex and subtle, and will age for decades. In cooler climates such as Bordeaux, Cabernet Sauvignon will display aromas and flavors of black currant, accompanied by green bell pepper notes, mint and cedar. In milder climates, the black currant flavors are often accompanied by black cherry, blackberries and black olive notes while in warmer climates they can lean towards the over-ripe and jammy side.

> Check out GAYOT’s Wine of the Week.

For American Cabernet Sauvignon lovers, the Napa Valley is the place for great wine. And for those who follow Napa wine, you know why the 2015 Insignia tops our Best Cabernet Sauvignon list. Made from 90% Cabernet, carefully blended, this vintage is, simply put, a knockout. It is rich with blackberry and cassis, cocoa, graphite, cedar and the grip of grainy tannins. This is a wine you could drink now or cellar for 10-15 years.

2015 was a great year for many, although not all, Bordeaux vintners. The year blessed Mouton Rothschild with one of its finest vintages of all time. If you are a collector, this is one to snap up quick, if you can. A deeply colored wine, it offers exuberant black fruit flavors balanced with sexy spices. It is a wine you could drink now, if you really can’t wait, but it will continue to evolve and potentially improve for a decade or more.

> COFFEE & CHOCOLATE: They make a delicious combo. Do it with these artisanal Belgian chocolates we have tasted for you. ENJOY 10% OFF YOUR ENTIRE ORDER with GAYOT’s exclusive promo code. ORDER NOW!

Another world-renowned wine having a remarkable vintage, the 2014 Sassicaia truly puts Italian Cabernet on the map. Garnet-hued, it offers raspberry and black cherry fruit intermingled with intense baking spices and just a hint of sweaty leather. For a Cabernet, it feels surprisingly weightless on the tongue. Yet it lingers long, making sure that its impression is made.

Yet another home run for Bordeaux’s Pauillac region, the 2015 Château Pichon-Barone easily makes our list of the Best Cabernets. A rich, full-flavored wine, it offers the best of summer berries and the intensity of winter spices, making it a good choice for any time of the year. The wine’s velvety tannins give it sensual texture as well as ageability. Château Pichon-Baron Longueville is Second Grand Cru Classé in 1855.

Michael and Arlene Bernstein were the first to plant grapevines on Mount Veeder in 1970. When their Cabernet cuttings took root and flourished, they knew they were on to something. Encouraged by their friend and Napa legend Robert Mondavi, the Bernsteins established the first winery on Mount Veeder. Today, the winery has three vineyard ranches nestled high in the Mayacamas Mountains, producing powerfully flavorful, concentrated wines that express their unique mountain terroir.

This blend has a deep garnet color, a rich nose with ripe black currants, plum, black cherries with hints of chocolate and spices. The palate is loaded with ripe black fruits, fine tannins and good mountain acidity making for a well-balanced, complete and complex wine.

Paso Robles is not California’s most popular Cabernet-producing region, but it is a region highly respected by anyone who loves intense, mature red wines. This reserve wine from DAOU perfectly expresses all that there is to love about Paso Cab. An intense and highly extracted wine, it offers complex aromas and flavors of black plum, cherry, cassis, olive, mushroom, cedar and spice all delivered with drama and great length. If you aren’t prepared to have your mouth stained, do not drink this wine!

When it comes to Cabernet, Coonawarra is Australia’s answer to the Napa Valley. This region is known for producing outstanding Cabernet and Penley Estate’s Phoenix sets the bar high for great wines in an affordable price range. A dark and richly concentrated wine, it offers tongue-coating tannins, intense blackberry and cassis flavors and a persistent curry spice. Although it’s under $20, Phoenix drinks like a much higher priced wine.

The Red Hills region’s potential for Cabernet is relatively untapped, but it may very well be the future of California red wine. Obsidian Ridge is most definitely blazing a trail for the region. Their 2016 Half Mile is a well-structured wine with glorious spice notes on both the nose and palate. Fruit flavors of plum and black cherry mingle with toasted oak notes and chocolate toward the back of the palate.

Unlike many of the wines on this list, which represent something exciting and undiscovered, this wine makes our Best Cabernets list for the exact opposite reason. This is a wine you can count on, year after year, to represent exactly what Napa Valley Cabernet is all about. Made with grapes from two iconic Napa appellations, Oakville and Stags Leap, it is a textbook wine. It won’t excite or surprise you but it will deliver a crowd-pleasing, full-bodied Cabernet with loads of ripe fruit, firm tannins and modest spice, all at a very fair price.

Sourced from the same famed vineyards as its beloved inspiration Schrader Cellars, Double Diamond is sourced exclusively from a complement of prime vineyard estates in Napa Valley’s world-renowned Oakville AVA, including their To Kalon Vineyard. The 2018 Double Diamond is a new label, made from 100% Cabernet Sauvignon, aged in 50% new French oak for 16 months. Around 80% of the grapes were sourced from the To Kalon Vineyard.

The wine is deep garnet in color. The nose shows a bowl of ripe red fruit sprinkled with some mint, licorice and spices. The palate is well-balanced, showing ripe but present tannins, luscious red fruit and a lingering, complex finish.

If you think you can’t find good Cabernet Sauvignon for under $20, this will be the wine to change your mind. This Chilean wine makes our list of the Best Cabernets because it is one of the best values the Americas has to offer. A rich and earthy wine, its aromas are complex but dominated by black plum and spices. It’s juicy on the palate with round tannins, cherry and plum flavor and tobacco and vegetal notes on the finish.

This is an interesting and complex Cabernet, blended with grapes from all of South Australia’s best Cab-growing regions. It’s a well-structured wine made in a style that really accentuates spice. It offers hints of tobacco and bramble on the nose with an interesting interplay of black currant and olive on the palate. This wine’s tannins are firm. You could open it now but might want to wait a year or two to enjoy this one.

Sonoma tends to produce softer, gentler Cabernets than the wines that come from neighboring Napa. This wine makes our list because it does a nice job of showing off that Sonoma style at an attractive price. Even though this is an approachable wine, it still has solid structure, a compelling balance of forest and fruit flavors and a lingering note of cocoa powder on the finish.

An extraordinarily polished wine for the price, this is a good choice if you’re watching your budget. Made from 100% estate fruit, it offers aromas of blueberry and dried cranberry. A medium bodied wine that’s ready to drink now, it offers currant and sweet black plum flavors and a surprisingly long finish.

This might be the most fun wine on our Best Cabernets list. It offers Bordeaux-like notes of leather, tobacco and wild game yet it’s still a distinctly Paso wine. Its fruit flavors are blackberry and black currant with a hint of soy sauce. On the finish, there’s a lovely note of dark chocolate. It’s a wine with compellingly chalky tannins and a nice finish. This is one to enjoy now, not to lay down for later.