By admin
[youtube id=”wLIYIlnzsZk”] by Sophie Gayot When Alinea owner Nick Kokonas came to my table for dessert, after I had already sampled seventeen dishes from chef Grant Achatz, I had to share with him my thoughts: “Your restaurant should not be called a restaurant.” Yes, there is food, but it’s nowhere close to what one could ever experience at other dining venues. Achatz’s creativity is without limits, and tolerates no restriction, so expect the unexpected. What should it be called? Hmm… considering the homage and respect he pays to food, I can not say “food entertainment,” maybe an “ode to culinary invention.” As you might have seen in the past, I usually do a video interview with the chef after I have dined at the restaurant. Believe it or not, chef Achatz is so shy, I wasn’t able to get one this time. Although the video above is quite long, you will get to experience the meal at Alinea the way I did. Make sure to watch until the end, as chef Achatz does appear, but I don’t want to ruin the surprise of what happens when he does! For the last seven years in a row, Alinea has held a well-deserved position on our list of the Top 40 Restaurants in the U.S. for our Annual Restaurant Issue. You can click on each photo to enlarge. 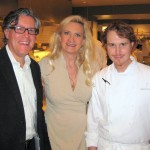 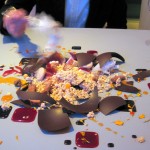