Another Day at the 2012 COLCOA Edition

By admin
[youtube id=”6N33kK4VV5k”] by Sophie Gayot Yesterday, six movies were shown at COLCOA (City of Lights City of Angels), the French Film Festival in Los Angeles. I chose to watch “Les Adieux à la Reine” (Farewell My Queen) by director Benoit Jacquot. I am not sure it was the best choice… Farewell My Queen takes place in Versailles over four days, starting with the decisive date of July 14, 1789. Through the eyes of Sidonie Laborde (Léa Seydoux), we follow queen Marie-Antoinette (Diane Kruger) during the beginning of what will become the French Revolution. Sidonie, who is the queen’s reader, walks us through the magnificent Hall of Mirrors of the castle of Versailles, through the dirty private hallways and shows us the intrigue between Marie-Antoinette and the infamous aristocrat Gabrielle de Polignac (Virgine Ledoyen). Despite the grand setting at Versailles and the beautiful costumes, the end result is rather disappointing. That could be because there are too many close-up scenes that make viewers feel uncomfortable. The film does not bring anything new to the historical scene, and there is even suspicion that Sidonie Laborde did not exist, as nobody was reading to Marie-Antoinette. (And why do we keep seeing rats?) You can click on the photo to enlarge. 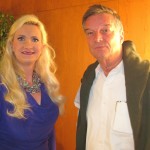