Chef Ryan DePersio in the kitchen

by Patricia Mack Now that the Olympics are over, the popular NBC series “America’s Got Talent” returns to airing live shows from the New Jersey Performing Arts Center in Newark. That puts the pressure on chef Ryan DePersio of NICO Kitchen + Bar; the stage where AGT broadcasts live every Tuesday and Wednesday nights through September 13 is under the same roof and just steps away from the restaurant’s doors. On broadcast nights, the restaurant prepares an appealing pre-dinner menu composed of dishes that come to the table fast to insure that the audience is in its seats no later than an hour before air time. (Guests need to arrive at least 90 minutes before show time.) One of the most popular offerings is the NICO cheeseburger made with New York Cheddar, grilled red onion and sliced tomato. There’s more sophisticated fare as well such as porcini dusted sea scallop; buttermilk baked chicken breast with black truffle pesto; mascarpone polenta fried with gorgonzola fonduta; cavatelli with octopus, peppers tomatoes and gremolata; lobster mac-n-cheese and garden pizza made with asparagus and goat cheese. The bar at NICO, which opened this past February, has not forgotten its next-door neighbor, either. Inspired by the AGT cast which includes host Nick Cannon and judges Sharon Osbourne, Howie Mandel and Howard Stern, DePersio’s bar crew created four original cocktails for the run of the show: The Cannonball made with Rémy Martin, Bacardi, Triple Sec and sweet and sour mix; RedHeaded Sharon comprised of Absolut Peppar Vodka, grenadine and lime juice; the Howie Zowie made with Absolut, Kahlua and tonic; and the SternMeister, a mix of Jaegermeister and Red Bull. Related Content: New York Restaurant News New York Culinary Events New York / New Jersey Wine Events You can click on each photo to enlarge. 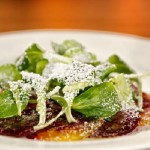 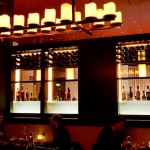 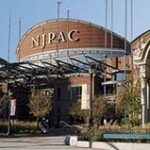 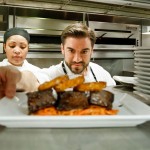 Chef Ryan DePersio in the kitchen 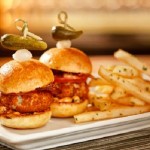