by Alain Gayot  Consumers have been spoiled by the Internet, allowing them to buy thousands of dollars of the latest technology from virtual stores like Amazon without even getting dressed. Smart retailers realize they have to offer shoppers more and more in order for them to spend the time, gas money and energy to visit a brick-and-mortar store. Responding to the heightened competition, Sony is rebranding its retail stores while making them more fully interactive.   Opening today at Westfield Century City shopping mall in Los Angeles is the first newly branded Sony store in the U.S. Seven more are poised to open later this year, with a vast roll out scheduled for 2012. Steve Krajenka, VP for Retail Stores at Sony, is proud to showcase to visitors and buyers what the new Sony stores are all about. “Yes, the design of our retail stores is important,” says Krajenka, “but it’s more about having the product stand out so that customers can touch, feel and play around with pieces of electronic merchandise.” Moreover, the store is staffed with Sony sophisticated users, not just salespeople.   At a launch party for the 4,200-square-foot retail space, which opened with a bang thanks to singer Mark Ballas and DJ Reflex, we had the opportunity to experience Sony’s new retail strategy. Amidst the latest HD TVs, digital camcorders, Blu-ray players and laptops, we tried out a new HD, 3D, one terabyte notebook computer ($1,600) that can play regular DVDs in 3D. Getting to interact with products like this one should keep consumers coming.  For more information on Sony retail stores, visit www.sony.com/sonystore.  You can click on each photo to enlarge. 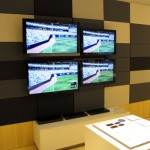 HD TVs on display at the Sony store 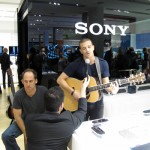 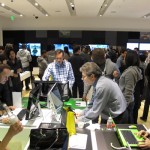 Customers testing out new products at the Sony store 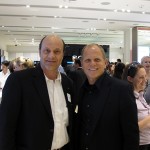 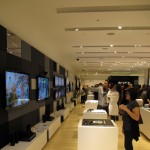 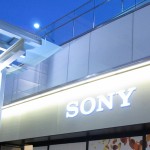 The Sony store at the Westfield Century City mall 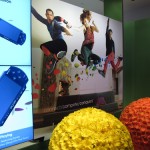