By admin
[youtube id=”_HOVqrHfrmQ”] by Sophie Gayot If you’re a calorie counter who enjoys cocktails, it’s time to try Voli Light Vodkas. Made of superior French wheat and natural ingredients, Voli’s line of vodkas — Lyte, Lemon, Espresso Vanilla, Raspberry Cocoa, Orange Vanilla and Mango Coconut — are on average between 25 per cent and 40 per cent lower in calories than their counterparts.  It is a first in the spirit industry. They are produced in Cognac, France, where they are distilled five times and filtered four times. The flavors of the vodkas are enhanced by electrolytes, so you can eliminate the high calorie sugary mixers — that is the trick. Watch my exclusive video interview with VP of Marketing Erin Harris to learn more about the company partly owned by Pitbull (Latin rapper Armando Christian Perez), and for which eight-time Grammy award-winning Black Eyed Peas chanteuse Fergie is the spokeswoman. You can find Voli Light Vodkas in major markets in the U.S. for an estimated retail price of $19.99. Try this simple recipe for Fergie’s Orange Vanilla Fusion (approx. 79 calories): Pour 1.5 oz Voli Orange Vanilla over ice and add a splash of club soda. If calories aren’t a concern, check out our list of the World’s Top 10 Vodkas and Top 10 Flavored Vodkas. You can click on each photo to enlarge. 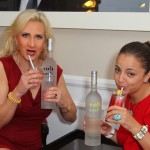 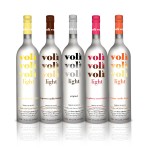