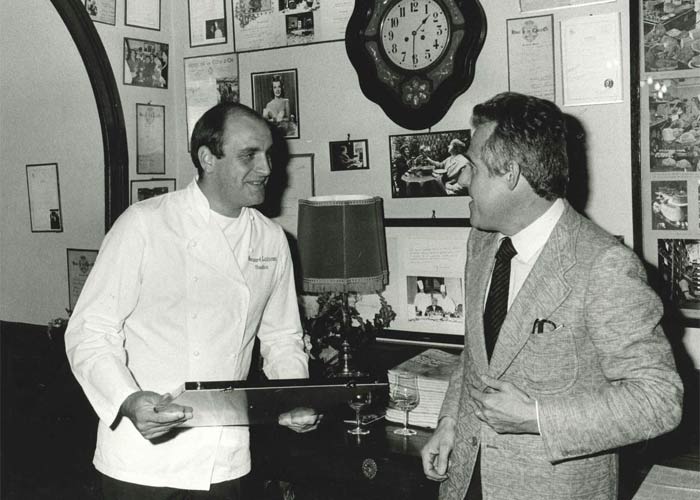 A Time to Reflect on the “System”

Paul Bocuse along with other great chefs are indignant about the death of Bernard Loiseau. We share their emotion, and we participate in the sorrow. While their message is clear, isn’t now a time to reflect more than to chastise?

As the end of Bernard, who rose all by himself from poverty to celebrity, is shocking, it is a sad opportunity to take the time to reevaluate the roles we accept to play in the order of our current society. If we abide by its rules and aim to accomplish ourselves, what else can we do than fight our way through, struggle with competition, race for fame, and attempt to gain glory and perhaps money? This is “the system.” The system breeds winners, as well as losers. One can win and lose. Loiseau benefited from the system, and, in the end, he was also a victim of it, as are so many others who will remain anonymous forever.

The path to the top of any profession is narrow, but treading forever the summits is an impossible challenge. Bernard was one of the few who rose from modest apprenticeship to world fame and never stopped to undertake adding business responsibilities to his ingenuity. His work, as the work of all restaurateurs, is among the toughest and most demanding ones we know of. We would be blind not to see the incredible energy that needs to be deployed in the kitchens. It never ends and the call is for more effort everyday. How long can a man or a woman sustain the permanent pressure resulting from the very nature of his or her success? It could have been too much for Bernard. He is not the only one.

Remember the collapse of the black “gazelle” Marie-José Perec, the world champion of the 400-meter race. Under the pressure (from the public, the media, the team) she fled from the stadium in Sydney while the world was expecting to see her repeating her victory on the Australian track.

Stress never gives a break to those who want to perform at the top whether it’s tennis, music, theater, literature, art or any human activity including cuisine. Through the media, the public is watching the modern heroes prompt to notice their shortcomings more than their triumphs, the latter being expected — n’est-ce pas? — to occur everyday.

It is legitimate to ask questions about the way the media does its job when it deals with the complexity of this arduous profession. Judging always poses a grave moral problem. Many factors enter into the equation of a final verdict and it takes quite some knowledge and experience to pretend to resolve it satisfactorily. Is this wisdom and reflection always present in the opinions about the restaurants delivered to the public? Was it the case in this particular instance? For obvious reasons, it is not for us to decide. It is up to the French public to provide the answer.

As for us, the moral line has not changed: The media plays its role when it assesses with honesty and competence the merits of an establishment and the media cannot ignore that these merits may vary in time. For as Beaumarchais wrote: “without the liberty to criticize there is no merit in praise.” It turned out to be the basic foundation of the modern press and by extension of our democracy.

More about Bernard Loiseau
> All the Rage about Loiseau
> GaultMillau Controversy