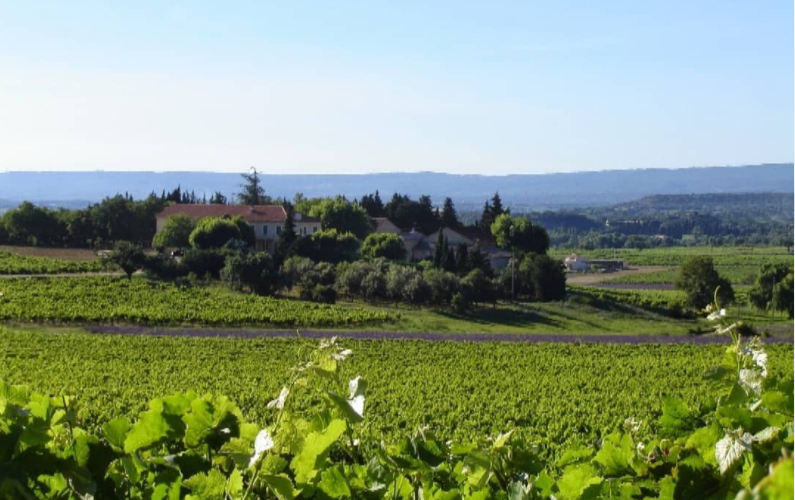 The Côtes du Rhône appellation covers much of the Rhône Valley, following the Rhône River from Vienne in the north past Avignon in the south and encompassing 171 different villages. Therefore, the region’s geography is exceptionally diverse, ranging from steep slopes to rolling hillsides.

Though the Côtes du Rhône AOC covers vineyards in both northern and southern Rhône, much of the production is concentrated in the south, with Avignon considered as its capital. Here, the Mediterranean climate creates hot, dry summers and mild, wet winters. During the growing season, rainfall is notoriously scarce, and the sun is abundant, supplying more than 2,800 hours of sunshine a year. Vines must contend with the fierce, northerly Mistral wind, but they also benefit from the Mistral’s drying effect, which lowers disease pressure and allows healthy grapes to ripen fully in the Rhône sun.

The Côtes du Rhône AOC was established more than 80 years ago, but that’s a blink of an eye compared to the region’s winemaking heritage. More than 2,000 years ago, the Greeks and then the Romans colonized the area, bringing their wine traditions to the region now known as the Rhône Valley. As early as 125 B.C., the Romans established the city of Vienne and created terraces on the surrounding land, planting vines to protect them. Other cities—and their surrounding vineyards—were founded soon after.

Even after the fall of the Roman Empire, winemaking continued in the Rhône Valley over the following centuries. In 1309, Pope Clement V relocated the papacy to Avignon and planted papal vineyards, which successive popes expanded and championed. This served to raise both the quality and awareness of the wines, which would later be named Côtes du Rhône. When the papacy moved back to Rome in 1378, wines continued to be shipped to the Papal court in Italy.

In the 17th and 18th centuries, Côtes du Rhône wines were sold readily to both French and British consumers. The first regulations to ensure the authenticity and quality of these wines were introduced in 1650, followed by a 1737 royal decree that required all barrels to be designated with the letters “C.D.R.”

Although the southern Rhône was one of the first French regions hit by phylloxera in the 19th century, vintners replanted and in 1937, Côtes du Rhône became one of the country’s first AOCs, cementing the region’s quality reputation.

On 250 acres of land in the hills above the village of Valréas, a beautiful Provençal house, surrounded by olive and truffle oak trees, lavender and thick forest, is the center of the idyllic estate of Domaine du Séminaire. The vineyards are near the northern limits of ripening Grenache, in the colder foothills of the Alps, where they are swept by the strong mistral winds. Hervé Pouizin is the fourth generation to farm this land; he and his wife Mathilde have preserved the self-sufficient domaine mostly as it was a century ago, with one key exception: they converted to organic farming. Fermenting their wines in the same huge concrete tanks since 1938, the couple takes an old-school approach to winemaking and uses no oak. They produce high-toned, bright, floral wines, in keeping with their terroir, bottles early to preserve the fruit and with minimal use of sulfur.

The wine has a bright ruby color with purple hues. The nose reveals wild berries with a hint of licorice. It is very well balanced on the palate, showing ripe fruit and juicy acidity.