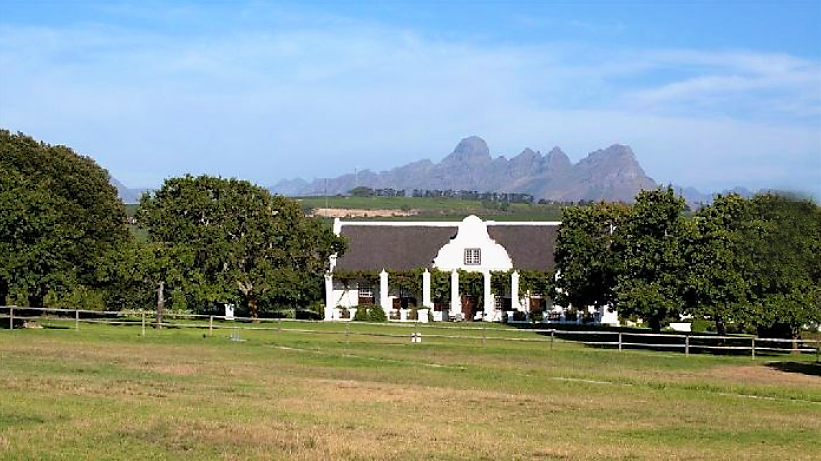 There is a hint of salt in the air. That’s because when you are out and about in the South African wine country on the Western Cape, you seem to be able to smell the rough, wild ocean… Sometimes you can even see it in the distance.

Just under 40 minutes by car from Cape Town is a paradise: majestic wineries with delightful Cape Dutch architecture are lined up in the shadow of a never-ending mountain range. The valleys and foothills are fertile and planted with vines. One name in particular achieved world fame here: Stellenbosch, probably one of the most famous cities in South Africa.

It was named after Simon van der Stel, the first governor of the Cape Colony, who founded Stellenbosch in 1679. This makes Stellenbosch the second oldest municipality in the country and is now home to around 40,000 inhabitants. Many of them are employed in the wine industry, because the community is considered THE center of the South African wine-growing regions and is the seat of the renowned Stellenbosch University, which was founded in 1918.

An interesting aspect is that South Africa is the only country in the world that can accurately date the beginning of its wine industry. It was February 2, 1659, when Jan van Riebeeck, the first governor on the Cape, wrote in his diary: “Today, thank God, praise and thanks, wine was pressed from the grapes on the Cape for the first time.”

Growing fine wines on the Meerlust Estate has been part of the Myburgh family tradition for eight generations, beginning in 1756. Long recognized for producing world-class wines, the Meerlust Estate is singularly rich in charm and history. A tour of the estate, situated 15 kilometers south of Stellenbosch, reveals its graceful manor house, classical wine cellar, rose gardens, family cemetery, dovecote and bird sanctuary.

The first owner of the property, a German immigrant named Henning Huising, recognized the beauty and potential of the farm and settled here in 1693. He named his newfound home “Meerlust,” meaning “pleasure of the sea,” as the manor house sits on a granite outcrop only five kilometers from False Bay. In the warm summer months the vineyards are refreshed by ocean breezes and evening mists which roll in from the coast.

The first vintage of this wine was 1980 and it was the first Bordeaux blend made in South Africa, at the time a daring undertaking. It was named “Rubicon” as a reference to the moment of “no turning back,” the moment Julius Caesar and his troops had crossed the river Rubicon in Northern Italy to capture Rome in 49 BC.

The different varietals were fermented separately with a combination of remontage and delestage. The wines were transferred to barrel early for malolactic fermentation in 55% new French oak, 25% second fill barrels and the remaining 20% in older French oak barrels. The wine was barrel aged for 16 months before bottling.

The wine shows a scarlet red color. Wonderful exotic aromas of plum, sandalwood, tobacco leaf and a touch of vanilla unfold in the nose. The palate is medium bodied with flavors of cassis, cherry and rose hip, finishing with soft tannins, great balance and harmony.