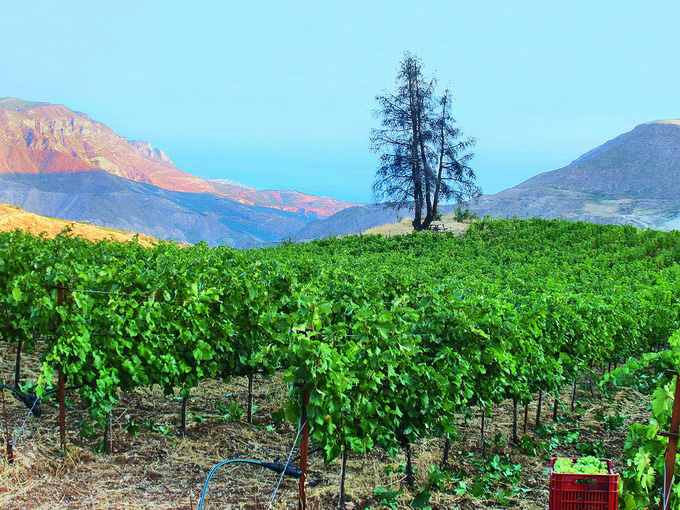 > ABOUT RETSINA
The name Retsina is given to all white or rosé wines whose taste has been altered by the addition of pine resin to the fermenting must. This process comes from a method used in Greek antiquity. To preserve the wine from spoilage, the amphorae were covered with a layer of resin. Although this wine is made all over Greece, the main production area is the central part of Greece and Attica, the peninsula on which Athens is located. Most of Retsina is made from the Savatiano grape.

Years ago, Retsina was synonymous with cheap, headache-inducing wine and quickly declined in popularity. In the past, Retsina was the only wine we unanimously agreed to be virtually undrinkable and characterized as cheap ‘house wine.’

Today, Retsina accounts for 5% of the total wine production in Greece. Quality has improved tremendously in the last five years as new laws have been introduced. All Retsina wines that are now on the market are made under strict supervision and rules. In addition, a new generation of Greek winemakers and sommeliers has worked tirelessly over the past decade to restore Retsina’s position in the international wine world. They experimented a lot with different grape varietals and fermentation methods.

The high-quality Retsina still has a slight resin taste, but is also crispy, refreshing and full of character. It’s a light wine with medium acidity and a slightly bitter taste. The aromas are very fine and often contain notes of (how surprising??) pine, resin, herbs and citrus fruits such as lemon and grapefruit. So, today’s Retsina is back on the road again!

> ABOUT THE WINERY
The Spanos brothers, Aristos and Stathis, are locals who were involved in grape growing and wine production early in their lives. In 1999, they meet Panayiotis Papagiannopoulos, a talented and highly inspired winemaker, who joined the team. In the years that followed they produced the first bottles of Tetramythos, planted new vineyards, and in 2003 began the construction of a tasteful winery which they completed in 2004. Their philosophy is to combine scientific knowledge and traditional methods in order to produce high quality wines, in the most natural possible way, with low intervention and no additives, to express the typicity of the special regional terroir.

Tetramythos has stormed Europe with this revolutionary version of Greece’s most infamous vinous product. Treated with a seriousness never before accorded to a Retsina wine by anyone, it is made from the estate’s organic Roditis grapes (rather than the Savatiano used elsewhere), to which is added before fermentation a moderate quantity of resin drawn from pine trees growing on the property. Forty per cent fermented on wild yeasts in amphorae, the balance in stainless steel. Extended lees aging is the final touch before bottling.

The wine shows a bright yellow in the glass. The nose delivers aromas of lemon zest, peach, grapefruit, mint and rosemary. The palate is crisp with zippy acidity, a touch of mineral and has a lingering, well-balanced finish.