The Return of Soup 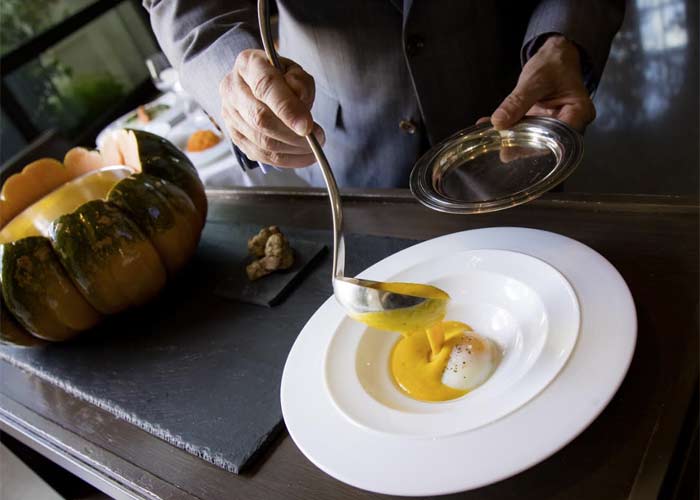 Soup is making a remarkable return to the tables in France, both in restaurants and at home. Trendy or traditional, soup is a dish that has never really gone out of style, since it is universal and probably one of the first forms of “prepared” food known to humans. Among some 40 recipes found on ancient Mesopotamian clay tablets, French historian Jean Bottéro discovered a surprisingly modern version of watercress soup.

Each region and each country ardently defends its native soup, be it borscht for the Russians, gazpacho for the Spaniards or pho for the Vietnamese. Each family in Provence possesses an ancestral formula for soupe au pistou, the deliciously pungent vegetable soup seasoned with garlic and basil. And even if onion soup isn’t all the rage in Paris, it certainly is popular with regulars at La Bonne Soupe Bistro, the veteran French restaurant founded in New York in 1973 by Jean-Paul Picot.

In the Middle Ages, soup was actually the term for a particular preparation where a slice of bread was placed in a bowl and covered with broth. The name stuck even once the slice of bread disappeared. The French word “potage” describes a fancy soup, and originates with the cooks of aristocratic families who lent their masters’ noble names to dishes like red bean purée (a.k.a. Condé) or cauliflower and potato soup (Barry).

So what’s the difference between soup and potage? Soup is made with vegetables while potages are generally composed of meat or fish-based broths. They are either finished off with a touch of cream or butter (or both!) or left plain in the form of consommé. Spotted on the menu at a top restaurant, soup can also mean a highly sophisticated preparation, such as Guy Savoy‘s artichoke soup with black truffles accompanied by a flaky brioche pastry with mushrooms and truffle butter.

But for ordinary daily life, simple soup is often encouraged for dinner since the water contained in the vegetables’ fibers actually rehydrates the body during the night. Vegetables such as onion, leek, fennel, zucchini, pumpkin and even cabbage, all possess diuretic qualities and contribute to the natural cleansing of the human organism. A great source of minerals, especially potassium, soup is even more beneficial if the vegetables are cut into small cubes, such as in Italian minestrone.

Soup “bars” appeared on the scene in Paris just a few years ago, and while they were a hit at the time, the phenomenon didn’t last. The brief soup scene did however inspire local chefs to include soup among their repertoires. It is not unusual to see exotic soups such as Moroccan harira or Vietnamese pho on the menu at contemporary Parisian bistros, such as Les Papilles in the 5th arrondissement, whose superb Provençale soup “aïgo” is alone worth a visit. This simple concoction of lightly sautéed diced potatoes, orange zest and garlic is seasoned with saffron, cooked in milk and served with crispy croutons, black olive tapenade, chives, red pepper and diced candied orange—a delicacy!