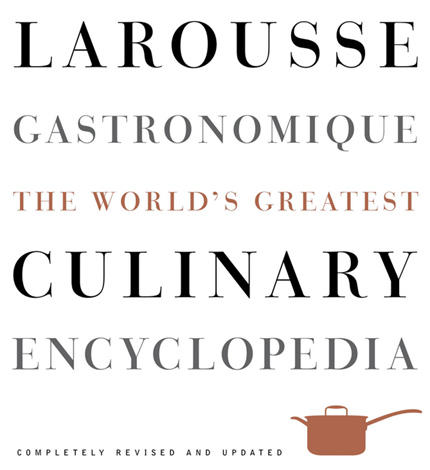 Chefs and foodies alike throw around the term “Nouvelle Cuisine” easily. But people have often wondered what exactly the term means and what its coiners strove to accomplish. Delve deeper into the subject by reading The True Story of Nouvelle Cuisine, a personal account by André Gayot, or check out the following definition from Larousse Gastronomique: Larousse Gastronomique: The World’s Greatest Culinary Encyclopedia.

Definition: A moment in cookery, started in 1972 by two food critics, H. Gault and C. Millau, with the aim of encouraging a simpler and more natural presentation of food. The movement combined a publicity campaign with novel recipes and a new ethic, although the idea itself was not new. Foreshadowing the apostles of nouvelle cuisine, Voltaire complained: ‘I confess that my stomach does not take to this style of cooking. I cannot accept calves’ sweetbreads swimming in a salty sauce, nor can I eat mince consisting of turkey, hare, and rabbit, which they try to persuade me comes from a single animal. As for the cooks, I really cannot be expected to put up with this ham essence, nor the excessive quantity of morels and other mushrooms, pepper and nutmeg, with which they disguise perfectly good food.’

Advocates of nouvelle cuisine reject the over-rich, complicated, and indigestible dishes that are no longer suitable to a generation conscious of the health hazards of overeating, especially of fatty foods, known to contribute to obesity and cardiovascular disease. To counter this—and the increasing use of processed food—they espouse authenticity and simplicity in cooking. The nouveaux cuisiniers seek to uphold a concept—their theorists even talk of a world vision—that combines the professions of medicine and dietetics. Their guiding principles are: absolute freshness of ingredients, lightness and natural harmony in the accompaniments, and simplicity in the cooking method. This means less fat, no flour liaisons, no indigestible mixtures, and no ‘disguised’ dishes. Instead, they advise light sauces based on meat juices, stocks, essences, and spices; vegetables prepared so that their natural flavors are retained; and rapid cooking without fat, which allows the food to retain some of its texture. This entails dry cooking in the oven, or under a grill (broiler), steaming, stewing, cooking in a bain-marie, or cooking en papillote. Dieticians agree that quickly cooked food retains maximum nutritional value.

Food offered by the ‘new cooks’ includes crisp vegetables, resplendent in their natural colors, and elegantly trimmed, flanking thinly sliced meat; airy mousses accompany pink and firm fish; while vegetable purées become the stars of the culinary repertoire. Astonished gourmets scan their menus and find gigot applied to fish, not mutton; darne to meat, not salmon. They may also find gruels, rare produce, compotes not of fruit but of vegetables, and perhaps even soups as dessert. While not discarding the wisdom of their predecessors, the new cooks are trying to widen their scope: for instance, Jacques Manière’s eggs Céline, with caviar and a little vodka; Pierre Vedel’s lobster soup with sweet garlic; Michel Guérard‘s aubergine (eggplant) purée cooked in saffron-flavored steam; or Alain Senderens’ calf’s sweetbread in sea-urchin cream. All offer the diner strange, novel, exquisite, even nostalgic sensations. Sadly, it is only too easy for the exquisite to become ridiculous. In an effort to surprise, provoke and stimulate jaded palates, nouvelle cuisine sometimes oversteps the mark: the ‘pink at the backbone’ rule can mean fish oozing with blood; small vegetables become fragmented; and mousses and purées are added to every sauce. Although novel, such combinations can become pretentious, like the ‘mad’ salads, where lobster may find itself sharing a plate with foie gras, or herring is paired with pineapple. Where then is the much-vaunted simplicity?

Reports of a gastronomic revolution are exaggerated. Good cooking must always benefit from the old recipes and the precepts of classic cuisine. ‘There are few decisive acts in cookery, each step contributes to the end result’ is the dictum of Claude Peyrot, one of those craftsmen who defend both the old ways and the new. But there is no doubt that nouvelle cuisine, dedicated as it is to phasing out elaborate dishes, rigid formulae, and pompous and academic set pieces, suits the climate of the times in the same way that ‘bourgeois’ cookery suited the 19th century. Even the vocabulary is significant: there are no longer ‘great chefs’, but new cooks; authority yields to craftsmanship. The satirical humorist Claude Fischler wrote an article for Le Monde entitled The Socrates of the Nouvelle Cuisine, in which he said: ‘The artists in this field is no longer characterized by his overpowering authority, but rather by the opinionated modesty of an exponent of the maieutic art: in place of the cook as mercenary of the kitchen stove, we now have the Socratic cook, midwife at the birth of culinary truth.”