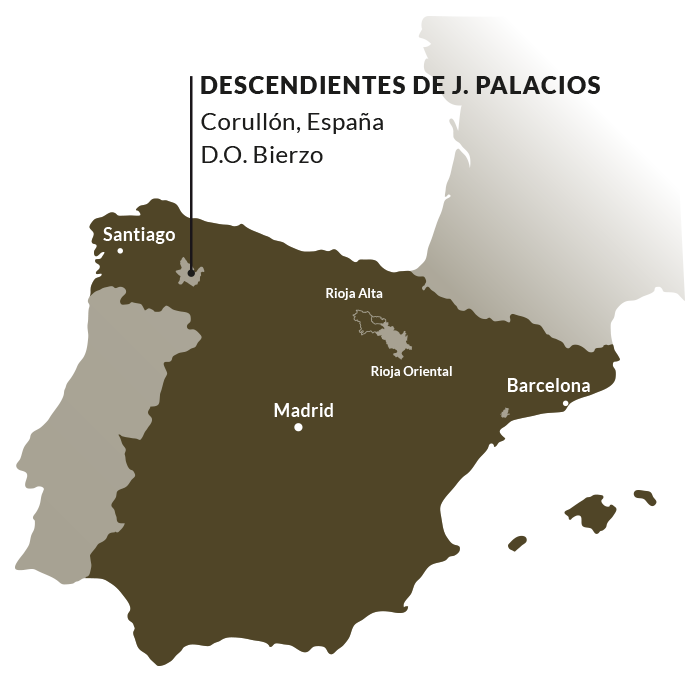 > FACTS
The Bierzo wine region in Spain is also called the gateway to Galicia. It is a fertile plain enclosed by mountains (Cordillera Cantabrica and the Montes de León). The vineyards are located on the mountain slopes between 1,200 and 3,000 feet and are planted in loose, slate-like, alluvial soil which is quite fertile. There is also some fine sand and sandy granite. The shelter of the mountains gives Bierzo a fairly temperate climate with many hours of sunshine and less rain than in Galicia. Temperatures fluctuate between 90ºF in summer and 30ºF in winter.

Wine from Bierzo is a transition between the light wines from Galicia and the heavyweights from the Duero valley. The best red wine in Bierzo is made from Mencia grapes and the best white wines from Godello and Dona blanco grapes. These local grape varietals are ideal for making excellent wines.

The main red grape varietal in Bierzo wine is the Mencia. It occupies 70% of the vineyards. In addition, the white grapes Dona Blanca, Godello and Palomino are increasingly grown in the Bierzo wine region. Merlot, Cabernet Sauvignon and Tempranillo are experimental blue grape varietals used in Bierzo wine.

Mencia is said to be somewhere between the structure of Cabernet Sauvignon from Bordeaux and the finesse of Pinot Noir from Burgundy. Others compare Mencia to Cabernet Franc, the fine grape that occurs in Bordeaux, but also in the Loire. In any case, she has the floral perfume of dates reminiscent of violets and the aromatic impressions of raspberries and blackberries. Still others note similarities with the Syrah from the northern Rhȏne Valley. In short, she has a character all her own, a bit rough and refined at the same time. Depending on the winegrower’s choices, the wines can be smooth and juicy, but also complex and suitable for storage.

> THE WINERY
During the late 1980s, Alvaro Palacios traveled his native Spain selling French barriques to winemakers. But his journeys had a second purpose: to find the best place to achieve his goal of making Spain’s greatest wine.

In 1990, he settled on Priorat, where he would achieve worldwide fame with “L’Ermita” and “Finca Dofí.” But there had been a close contender: Bierzo. It had all the ingredients Álvaro wanted—incredibly steep hillside vineyards, distinctive terroir and, most importantly, ancient vineyards of a unique red grape varietal, Mencía.

As far back as the Middle Ages, Cistercian Monks arriving from France had identified Bierzo as a special place for wine. They also saw Mencía as the varietal best suited to its slate/schist soils. Mencía was so closely identified with their work that the varietal itself was long thought to have French origins. While we now know that Mencía originated in Portugal, where it is known as Jaen, Álvaro had no doubts about the monks’ wisdom in pairing the variety with this rugged land.

Pétalos del Bierzo has a deep ruby color. The nose is powerful with aromas of ripe black and red fruit, an earthy touch and spices. On the palate, a mirror of the bouquet is completed with fine, ripe tannins and a touch of vanilla coming from the 10 months spent in barrel.