25 Years of Food at its Best by Alain Gayot and David Farley The first week of May is often dominated by thoughts of where to go for the long Memorial Day weekend at the end of the month. Or about summer travel, in general. For foodies, though, it’s about one thing: the James Beard Awards. As per usual, the awards took place this week at Lincoln Center and were a glorious gala of the country’s best of the best in the food industry. Chefs and attendees flew in from across the country, but the home team did very well. New York was well represented in the winner’s circle with Eleven Madison Park’s chef, Daniel Humm, taking the cake, or, rather the top award for Best Chef while Momofuku Bakery & Milk Bar’s Christina Tosi took home honors for Rising Chef. In the Best Chef NYC category, Gramercy Tavern’s Michael Anthony was the big winner. Other Big Apple restaurants and individuals that received awards included Terroir’s Paul Grieco for Outstanding Beer, Wine, and Spirits Professional and La Grenouille for Outstanding Service. Not all of the awards stayed in Manhattan. Wolfgang Puck won the Lifetime Achievement Award, while Next in Chicago won Best New Restaurant presented by Mercedes-Benz. Of course, a night like this couldn’t take place without the generosity of such sponsors, which also included Campari, Lavazza, Stella Artois and S. Pellegrino. Urbanspoon set up a suite on the balcony of Avery Fisher Hall where live music was performed and a cake baked by “Ace of Cakes” Duff Goldman honoring the James Beard Foundation’s 25th Anniversary was presented. After the awards, which were emceed by Alton Brown, the attendees spilled out into the lobby to swarm the dozens of food and drink offerings, which included everything from Champagne tastings to negronis to a great Dungeness crab Reuben sandwich by Vitaly of Paley’s Place of Portland. All the while there was plenty of whispering about where various after-parties would take place. Bar Boulud, the post-Beard awards standby, was packed. Predictably, Gramercy Tavern and Eleven Madison Park were flowing with Champagne Henriot and crammed with celebratory revelers until the wee morning. Keep coming back to GAYOT.com for more New York City Restaurant News, Restaurant Reviews, Culinary Events and NYC Wine Dinners. Related Content: 2012 James Beard Foundation award winners James Beard Foundation website You can click on each photo to enlarge. 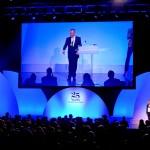 VIPs at the urbanspoon suite 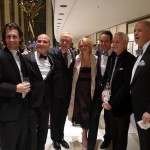 Patrick O’Connell of The Inn at Little Washington 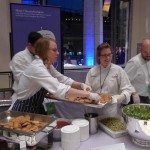 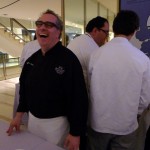 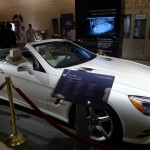 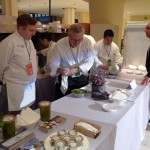 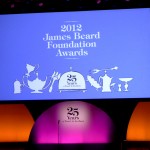 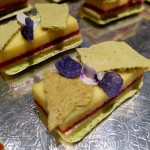 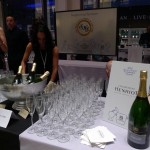 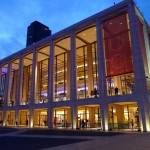 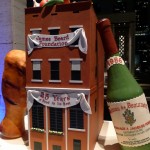 The 25th anniversary cake by Duff Goldman of Ace of Cakes