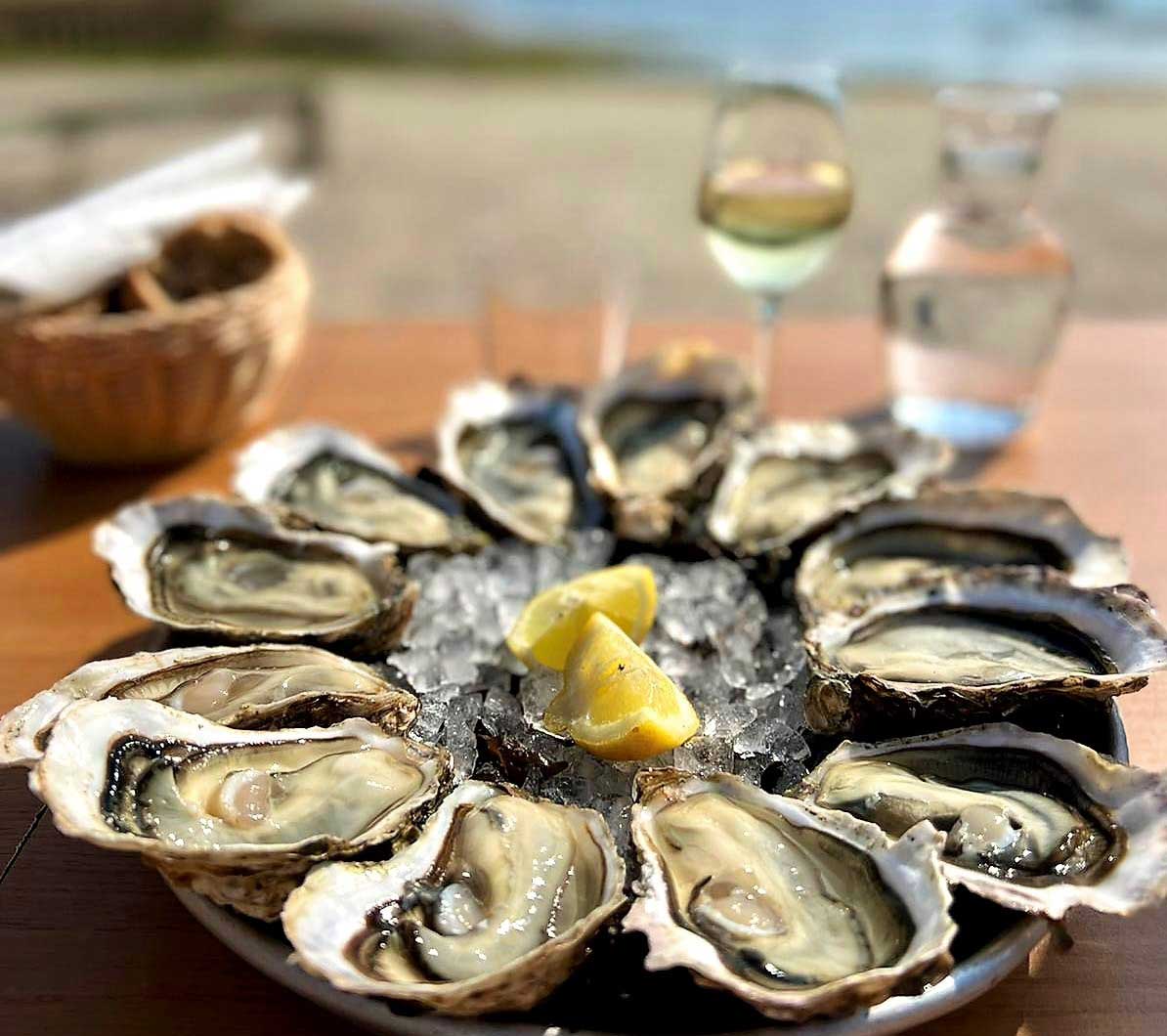 Pair Wine and Oysters for a Decadent Combination

Think about eating raw oysters, sitting in their shells — blue-grey, cold, quivering. Whoever thought of eating one for the first time surely did so on a dare. Is it any wonder, given the courage necessary, that oysters have been defined as good for everything from bones and brains, to appetites and sex?

No doubt, the most literate description of oysters can be found in M.F.K. Fisher’s 60-page, quasi-cookbook, Consider the Oyster, copyrighted in 1941, but as fresh as ever. In it, like a doctor of gastronomy, Fisher prescribes very dry white wine — a French Chablis, Pouilly Fuissé, or Champagne — as the “safest” match for oysters, especially when the two are served at the same chilly temperatures.

Although this wine advice was based on Fisher’s practical experience — “whether they were correctly drunk or not, I was” — there are no writers or sommeliers to our knowledge who would beg to differ. The wisdom of drinking light, puckery dry white wine with oysters is not so much accepted as assumed — like drinking water from a cup, and eating sashimi with chopsticks.

From One Varietal, Many Wines

The interesting thing about Chablis, Pouilly-Fuissé and Champagne is that all these wines are made from the same grape varietal, Chardonnay (although Champagne is usually blended from Pinot Noir, Chardonnay and smatterings of Pinot Meunier). Knowing this, it might stand to reason that one could substitute Chardonnay made from more readily available sources such as California or Australia, but here is where logic gets screwy.

Since the grape growing regions of California and Australia are so much warmer than those of France, Chardonnays from these areas generally lack the lemony tartness and sense of lightness that make the French wines so appropriate for oysters. By the same token, the same can be said about most other white varietals associated with the warmer (Southern) parts of France — such as Viognier, Marsanne, and Roussanne — which tend to make lower acid, fuller alcohol wines, less than optimal matches for the blue-grey oyster.

On the other hand, white wines made from the Sauvignon Blanc grape — no matter where in the world it is grown — tend to have a tarter edge and lighter quality than warm climate grown Chardonnays and Southern French whites. It is unclear why the original styles of French Sauvignon Blanc — sold by their place names, such as Sancerre and Pouilly-Fumé, did not make it into Fisher’s original treatise. Neither did the simple, feathery light and lemony white wines made from Picpoul (a grape name that literally translates as “lip stinger”), which is probably the only white wine from France’s Mediterranean coast that makes an enduring match with oysters. We suspect that M.F.K. drank what she liked best, which is always the best policy anyway.

While oysters are famously immobile — once an oyster finds its rock, there it remains — they do have a powerful muscle that opens and shuts its gnarly shell. Contrary to popular opinion, not all oysters are created equal. First of all, there are several species. Perhaps the best known oysters are those originating from the waters off the East Coast — from Nova Scotia all the way down to the gulfstream waters from Florida to Texas — that are often called Bluepoints (although Bluepoints technically come only from New York’s Long Island). These longer shaped oysters belong to the Crassostrea virginica family.

Increasingly more popular today, especially in the western part of the U.S., are those known as Pacific oysters, belonging to Crassostrea gigas, and cultivated in the waters off Western Canada, Washington, Oregon and California. Also cultivated in the Pacific Northwest are the smaller, native species called Olympia oysters, classified as Ostrea lurida. Europeans, however, are more familiar with flatter shelled oysters known as Belons, belonging to Ostrea edulis.

Contrary to popular opinion, not all oysters taste alike. Some are brinier, some are creamier, some are leaner, some are fatter, and some even have a “fruity” taste, vaguely suggestive of cucumber and melons. Some of the differences in taste have to do with the species, but mostly it has to do with the temperature of the waters in which they are harvested; as well as the oyster’s fabled muscle, which constantly opens and closes to allow a flow of water and nutrients.

It is in the warmest waters — off the East and Gulf Coasts of the U.S. — where that muscle is most put to work. As a result of all that exercise, American East and Gulf Coast oysters tend to be the leanest in meatiness, and have less of that creamy, fruity taste savored by true-blue oyster lovers. In the coldest waters — off the Western coasts of Canada and the American Northwest — oysters live a more contented life, working that muscle much less and thereby developing a plumper, juicier, fruitier taste mingling with more distinctively briny, flinty flavors.

Despite the fact that we have never, ever passed up a plate of raw oysters anytime in our adult life, we confess that it took us years to figure out which oysters are which, and only recently have we discovered the wonderful variations of wine that the different oysters invite. Still, we are more likely to order our oysters like this: “I’ll take three of the small ones, three of the skinny ones, and six of the big, fat ones.” Considering the growing number of raw bars and seafood restaurants springing up across the country, it would behoove any oyster lover to at least consider the flavor profiles associated with the shapes.

> How to Open Oysters with Christophe Happillon. Watch our exclusive video.